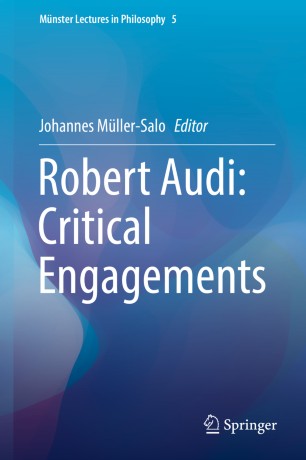 This volume documents the 20th Münster Lectures in Philosophy with Robert Audi. In the last decades, Audi's work has deeply influenced different important philosophical discussions, ranging from epistemology, theory of action, and philosophy of rationality to ethics, philosophy of religion, and political philosophy. The critical examinations collected in this book reflect the breadth of Audi's contributions in discussing topics as diverse as epistemological foundationalism and the theory of testimony, ethical intuitionism, the problem of evil and religion's public place within a liberal democracy. Besides his replies to each critical engagement, the volume contains an extensive essay on the problems of perception and cognition written by Audi himself.

This volume will be of enormous use to all scholars interested in the younger history of American philosophy and one of its leading figures. It will also appeal to philosophers and curious readers with an interest in the endeavor of designing a comprehensive theory of rationality and human reasoning.

Johannes Müller-Salo, M.A. M.A., born 1988, is a research assistant at the Institute for the History, Philosophy and Ethics of Medicine at the University of Mainz. His work is focussed on questions of ethics and medical ethics, political philosophy, and environmental aesthetics.