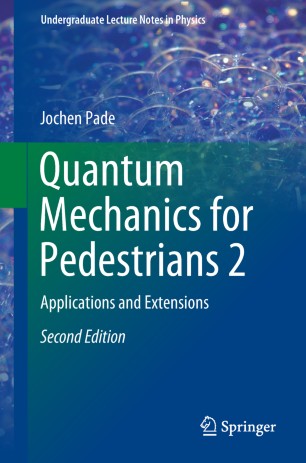 This book, the second in a two-volume set, provides an introduction to the basics of (mainly) non-relativistic quantum mechanics. While the first volume addresses the basic principles, this second volume discusses applications and extensions to more complex problems. In addition to topics dealt with in traditional quantum mechanics texts, such as symmetries or many-body problems, it also treats issues of current interest such as entanglement, Bell’s inequality, decoherence and various aspects of quantum information in detail. Furthermore, questions concerning the basis of quantum mechanics and epistemological issues which are relevant e.g. to the realism debate are discussed explicitly. A chapter on the interpretations of quantum mechanics rounds out the book.

Readers are introduced to the requisite mathematical tools step by step. In the appendix, the most relevant mathematics is compiled in compact form, and more advanced topics such as the Lenz vector, Hardy’s experiment and Shor’s algorithm are treated in more detail. As an essential aid to learning and teaching, 130 exercises are included, most of them with solutions.

This revised second edition is expanded by an introduction into some ideas and problems of relativistic quantum mechanics. In this second volume, an overview of quantum field theory is given and basic conceptions of quantum electrodynamics are treated in some detail.

Originally written as a course for students of science education, the book addresses all those science students and others who are looking for a reasonably simple, fresh and modern introduction to the field.

Jochen Pade studied Physics in Freiburg, Germany, where he received his PhD in Theoretical Physics in 1978. Since 1980, he has been a lecturer at the Carl von Ossietzky University of Oldenburg, Germany. His main research interests are in theoretical physics, the didactics and popularization of science.

“This book continues the excellent introduction to quantum mechanics of the first volume ... suited for beginners to get first insights which may be deepened reading the appendices. The two volumes can be best recommended generally and especially for self studies.” (K.-E. Hellwig, zbMATH 1445.81002, 2020)