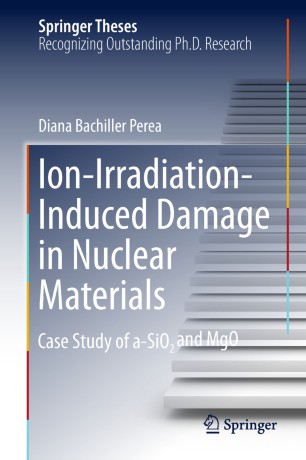 Case Study of a-SiO₂ and MgO

This thesis investigates the behavior of two candidate materials (a-SiO₂ and MgO) for applications in fusion (e.g., the International Thermonuclear Experimental Reactor (ITER)) and Generation IV fission reactors. Both parts of the thesis – the development of the ionoluminescence technique and the study of the ion-irradiation effects  on both materials – are highly relevant for the fields of the ion-beam analysis techniques and irradiation damage in materials. The research presented determines the microstructural changes at different length scales in these materials under ion irradiation. In particular, it studies the effect of the irradiation temperature using several advanced characterization techniques. It also provides much-needed insights into the use of these materials at elevated temperatures. Further, it discusses the development of the ion-beam-induced luminescence technique in different research facilities around the globe, a powerful in situ spectroscopic characterization method that until now was little known.
Thanks to its relevance, rigorosity and quality, this thesis has received two prestigious awards in Spain and France.

Diana Bachiller Perea studied Physics in the Universidad Complutense de Madrid (Spain) and obtained an Interuniversitary Master's Degree in Nuclear Physics in 2011. Her Thesis was carried out under joint supervision between the Center for Micro-Analysis of Materials (CMAM, Universidad Autónoma de Madrid, Spain) and the Centre de Sciences Nucléaires et de Sciences de la Matière (CSNSM, Université Paris-Sud, France). At present, she is working in the company Accelerators and Cryogenic Systems (ACS, Orsay, France) as a scientific expert in accelerators.​