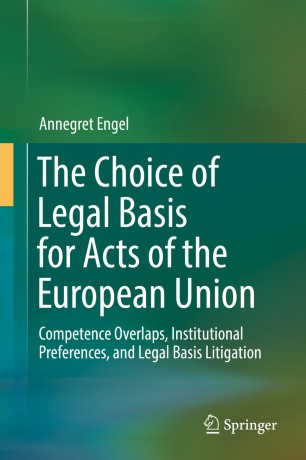 The Choice of Legal Basis for Acts of the European Union

This book provides the first comprehensive discussion of conflicts between legal bases in EU law. It fills an important gap in the existing literature on the choice of legal basis in EU law by analysing the structure of legal bases and the resulting legal basis litigation in the European Union, thus identifying areas of conflict produced by overlapping competences, divergent inter-institutional interests, and inconsistencies in the courts’ judgements. While certain cases have been discussed extensively in academic literature (e.g. Tobacco Advertising, ECOWAS), there has been little analysis of the general underlying criteria and principles governing the choice of legal basis on the part of European institutions. Such an analysis has, however, become necessary in order to better understand and possibly predict judicial outcomes, and to identify flaws in the current legislative framework.

Annegret Engel (LL.M., Ph.D.) has been working as a Lecturer in EU law at Cardiff University, School of Law & Politics (2014-2017). She holds a Ph.D. in EU Law from Durham University (2014) and has previously worked for the British Institute of International and Comparative Law in London (2008) as well as the DG Internal Market at the European Commission in Brussels (2010-2011). Her main research interests are in the field of European constitutional law with a particular focus on the delimitation of competences. In addition, she is also interested in EU external relations law, international agreements and the legal implications of Brexit.