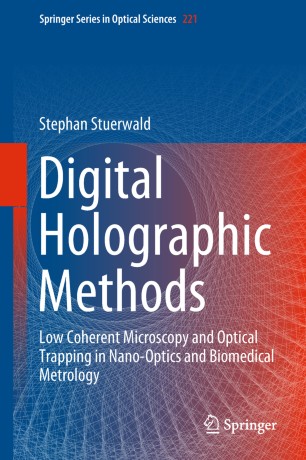 This book presents not only the simultaneous combination of optical methods based on holographic principles for marker-free imaging, real-time trapping, identification and tracking of micro objects, but also the application of substantial low coherent light sources and non-diffractive beams. It first provides an overview of digital holographic microscopy (DHM) and holographic optical tweezers as well as non-diffracting beam types for minimal-invasive, real-time and marker-free imaging as well as manipulation of micro and nano objects.

It then investigates the design concepts for the optical layout of holographic optical tweezers (HOTs) and their optimization using optical simulations and experimental methods. In a further part, the book characterizes the corresponding system modules that allow the addition of HOTs to commercial microscopes with regard to stability and diffraction efficiency. Further, based on experiments and microfluidic applications, it demonstrates the functionality of the combined setup, and discusses several types of non-diffracting beams and their application in optical manipulation. The book shows that holographic optical tweezers, including several non-diffracting beam types like Mathieu beams, combined parabolic and Airy beams, not only open up the possibility of generating efficient multiple dynamic traps for micro and nano particles with forces in the pico and nano newton range, but also the opportunity to exert optical torque with special beams like Bessel beams, which can facilitate the movement and rotation of particles by generating microfluidic flows. The last part discusses the potential use of a slightly modified DHM-HOT-system to explore the functionality of direct laser writing based on a two photon absorption process in a negative photoresist with a continuous wave laser

Stephan Stuerwald studied Physics and Mathematics at the University of Muenster in Germany and the Université Paris Sud 11, prior to completing his diploma thesis at the Center for Biomedical Optics and Photonics at the University Medical Center of Muenster. He then moved to the Fraunhofer Institute in Aachen in 2008, where he was a Research Fellow for 2 years before becoming group leader for optical metrology. He has received a number of awards for his achievements in optics-related research at various optics and metrology conferences and also obtained a research excellence grant from the National Metrology Institute of Germany within the framework of the European Metrology Research Program (EMRP). He also became lecturer at RWTH University in 2009. Since then has lectured on topics including (optical) metrology in general, sensor techniques and data processing and biomedical physics. During his work at the Fraunhofer Institute he prepared his doctoral thesis on optical wave front metrology. In 2015 he joined the Optoelectronics Research group as a postdoc at the University of California Berkeley.