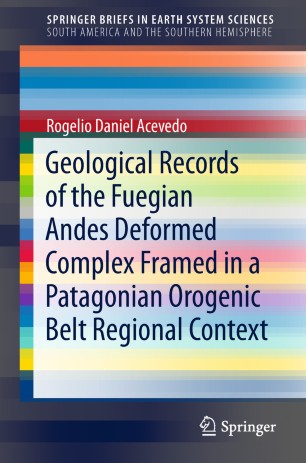 The Fuegian Andes in Argentina show both simple and complex aspects. The first ones refer to the general stratigraphy of the area and the latter result from their tectonic characteristics. Concerning the stratigraphy, an appraisal of the denomination and valorization of formations of Jurassic and early Cretaceous age is performed here to reach the simple scheme of the Fuegian-Patagonian continuity under the name of “Fuegian Andes Deformed Complex”. As an essay the formational nomenclature is simplified and the local concept of basement is evaluated. In relation to their structural aspects it is assumed that the formation of the orogenic Fuegian arc and the folding of the Mesozoic and early Tertiary layers are connected phenomena. Tectonic forces from the West, the Northeast and the South have had participation in the formation of the tectonic arc. The lithostatic column pressure was added once the layers were folded and thrusted upwards during the birth of the Fuegian Andes. Even the speculation of a great main fold overturned to North, as an abstraction, is considered. Instead, the Magallanes-Fagnano fault is appreciated only as a product of the transcurrent Quaternary movements, lacking associated eruptive processes that contribute to define plate borders.