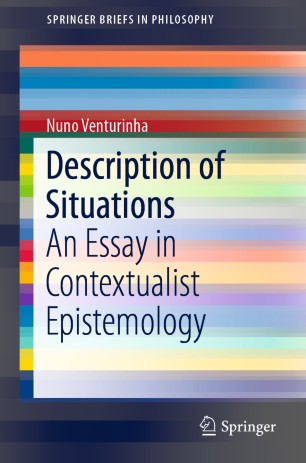 An Essay in Contextualist Epistemology

This book approaches classic epistemological problems from a contextualist perspective. The author takes as his point of departure the fact that we are situated beings, more specifically that every single moment in our lives is already given within the framework of a specific context in the midst of which we understand ourselves and what surrounds us.

In the process of his investigation, the author explores, in a fresh way, the works of key thinkers in epistemology. These include Bernard Bolzano, René Descartes, Gottlob Frege, Edmund Husserl, Immanuel Kant and Ludwig Wittgenstein, but also contemporary authors such as Stewart Cohen, Keith DeRose, David Lewis, Duncan Pritchard, Ernest Sosa and Charles Travis. Some of the topics covered are attributions of knowledge, the correspondence theory of truth, objectivity and subjectivity, possible worlds, primary and secondary evidence, scepticism, transcendentalism and relativism. The book also introduces a new contextualist thought-experiment for dealing with moral questions.

Contextualism has received a great deal of attention in contemporary epistemology. It has the potential to resolve a number of issues that traditional epistemological approaches cannot address. In particular, a contextualist view opens the way to an understanding of those cognitive processes that require situational information to be fully grasped. However, contextualism poses serious difficulties in regard to epistemic invariance. This book offers readers an innovative approach to some fundamental questions in this field.

Nuno Venturinha is Assistant Professor of Philosophy at the Nova University of Lisbon. He has taught as a visiting lecturer at the University of Lisbon and as a visiting professor at the Universities of São Paulo and Valencia. He was also a visiting researcher on various occasions at the Universities of Bergen, Innsbruck, Oxford, Cambridge and Helsinki. His current work concentrates on a variety of issues in epistemology. He is the author of Lógica, Ética, Gramática: Wittgenstein e o Método da Filosofia (INCM, 2010), and the editor of Wittgenstein After His Nachlass (Palgrave Macmillan, 2010) and The Textual Genesis of Wittgenstein's Philosophical Investigations (Routledge, 2013)