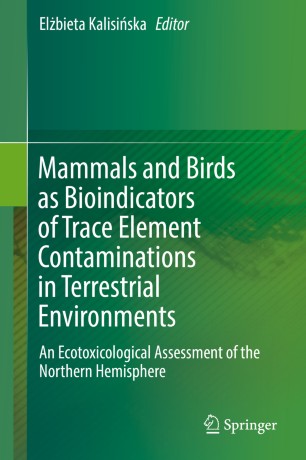 An Ecotoxicological Assessment of the Northern Hemisphere

The population explosion that began in the 1960s has been accompanied by a decrease in the quality of the natural environment, e.g. pollution of the air, water and soil with essential and toxic trace elements. Numerous poisonings of people and animals with highly toxic anthropogenic Hg and Cd in the 20th century prompted the creation of the abiotic environment, mainly in developed countries. However, the system is insufficient for long-term exposure to low concentrations of various substances that are mainly ingested through food and water. This problem could be addressed by the monitoring of sentinels – organisms that accumulate trace elements and as such reflect the rate and degree of environmental pollution. Usually these are long-lived vertebrates – herbivorous, omnivorous and carnivorous birds and mammals, especially game species. This book describes the responses of the sentinels most commonly used in ecotoxicological studies to 17 trace elements.

Elżbieta Kalisińska is Head of the Department of Biology and Medical Parasitology at the Pomeranian Medical University in Szczecin, following her tenure as Head of the Department of Zoology at the Agricultural University in Szczecin. She received her Master’s degree in Environmental Biology from Adam Mickiewicz University in Poznan in 1978, after which she pursued and completed PhDs in both Animal Biology and Zoology. Her main areas of interest include zoology (allometry, animal ecology), environmental protection, parasitology, and especially ecotoxicology. For years she has collaborated with Polish and international researchers in these areas, and has spearheaded several major ecotoxicological projects.