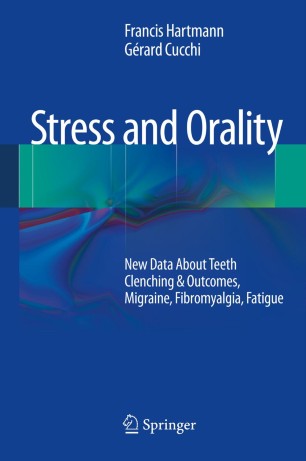 “The reading of STRESS and ORALITY written by F. HARTMANN and G. CUCCHI led me to believe that we should consider the problem of certain migraines, neck pain, fibromyalgia, and chronic fatigue from a radically different angle than the historically traditional approach.”  Pr Roger Guillemin (Nobel Laureate in Medicine)

Are oral disorders only an issue for dentists? The answer is no.

If your patients complain of pain and/or discomfort, if some are diagnosed as suffering from migraines, fibromyalgia or chronic fatigue, and if classical therapies have remained ineffective, this book could help in your daily practice. When it comes to the complex pathology called Temporo-Mandibular Disorders (TMD) most specialists favour a multidisciplinary approach and treatment of socio-psycho-emotional factors as well as dental, lingual or postural disorders. Yet little is known - from a clinical point of view - about a tricky oral spastic habit called severe teeth clenching.  In view of the lack of clinical findings from classical investigations on the subject, it could be considered as the “hidden part of an oral parafunctional iceberg”. Neuroscience has been able to shed some light on the multiple connections between trigeminal and non-trigeminal nervous centres, which confirms the significant involvement of the stomatognathic system and trigeminal nerves (V) in both oral as well as non-oral major functions such as eating, breathing, speaking, hearing, and standing … and also confirms the extensive participation of the paired Vs in the human adaptation process. Too many physicians are still reluctant to admit the pathological responsibilities of the Vs. Therefore their role remains largely underestimated by clinicians. Stress conditions in introverted people cause a parafunctional habit (i.e. severe clenching), which in turn produces trigeminal overstimulation and nociception. Through a process of sensitization this can perturb some non-trigeminal nervous areas, such as the vestibular nuclei and cerebellum (involved in equilibrium). Would you then be willing to accept the possibility that a stressed and introverted patient who clenches hard, durably or frequently may end up suffering from dizziness? If not, this book is not for you. But if you accept the scientific data and clinical facts this book will offer a concrete therapeutic protocol: the Relaxing and Moderating Treatment (RMT), which can greatly help you to familiarize yourself with and neutralize this little known deleterious spastic oral parafunction and its many disconcerting pain-causing and dysfunctional clinical effects. Prepare to be amazed by the results, just as we were!