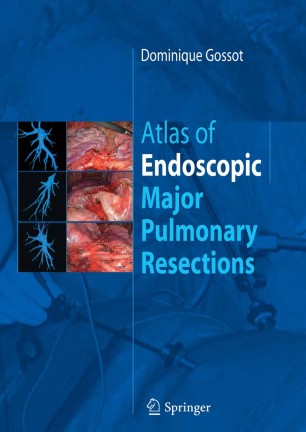 It is my greatest honor to be asked to write this foreword for the first edition of the Atlas of Endoscopic Major Pulmonary Resections by Dr Dominique Gossot. I have known Dr Gossot for over 15 years and have worked with him for many workshops and thoracic meetings. He is a pioneer in video-assisted thoracic surgery, and one of the most innovative thoracic surgeons I have known. Minimally invasive surgery has set a new standard of care for all surgical disciplines. Video-assisted thoracic surgery (VATS) offers a much kinder approach to the management of a wide variety of surgical conditions c- pared with conventional thoracotomy for these patients. Anatomical or major lung resections are a complex set of procedures commonly performed by thoracic s- geons. The adoption of the VATS approach for these procedures has received increasing acceptance by the thoracic surgical community, our pulmonologist and oncology colleagues, as well as the patients over the past two decades. There is now a growing body of evidence in the literature showing that the VATS approach is safe, oncologically sound, and associated with much lower morbidity compared with its conventional counterparts in the management of early lung cancers and benign conditions. Although there have been other books and atlases on VATS, this volume distinguishes itself in two respects.