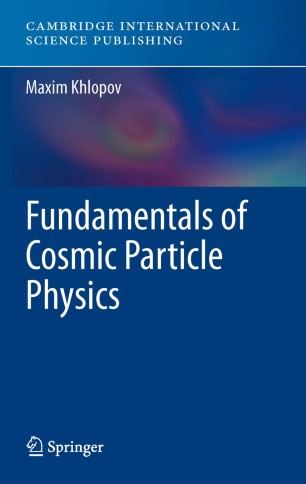 This current updated and expanded (this is an up-dated English translation of Prof. Khlopov's book "Osnovy kosmomikrofiziki", URSS, 2004) text reflects the large number of scientific advances, both theoretical and experimental, within the discipline of cosmic particle physics in the last 10 years. Some of the topics that have been added or updated include but are not limited to: HND or CMD+HND scenarios being implemented into sterile neutrino scenarios, the ramifications of extending the forms of dark matter with respect to our view of neutrinos, the origin of baryon matter and the need for nonbaryonic matter in current theories, problems the existence of dark matter raises with respect to cosmic particle physics and the relationship with (meta) stable (super) weakly interacting particles predicted by the extension of the standard model, restrictions on baryon and lepton photons, as well as problems associated with expansion, just to name a few. These and many other topics are readdressed in light of recent both experimental and theoretical developments. Other areas that will be of interest to the reader include the puzzles presented by direct and indirect effects of dark matter (e.g, results of experiments such as DAMA/NaI, DAMA/LIBRA and PAMELA) and may lead to nontrivial new solutions for the problem of its nature, like the existence of new stable families of quarks and leptons and composite dark matter scenario. The present work will be of interest to any researcher in this fascinating field dealing with fundamental interactions of the micro- and macroworld.