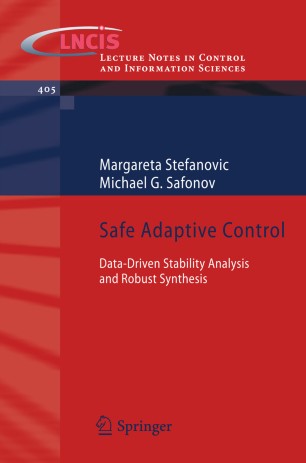 Safe Adaptive Control gives a formal and complete algorithm for assuring the stability of a switched control system when at least one of the available candidate controllers is stabilizing. The possibility of having an unstable switched system even in the presence of a stabilizing candidate controller is demonstrated by referring to several well-known adaptive control approaches, where the system goes unstable when a large mismatch between the unknown plant and the available models exists ("plant-model mismatch instability"). Sufficient conditions for this possibility to be avoided are formulated, and a "recipe" to be followed by the control system designer to guarantee stability and desired performance is provided. The problem is placed in a standard optimization setting. Unlike the finite controller sets considered elsewhere, the candidate controller set is allowed to be continuously parametrized so that it can deal with plants with a very large range of uncertainties.

“The authors start with a subjective ‘overview of adaptive control’ and ‘literature review’ … underlying the limitations of the existing adaptive control algorithms and motivating the concepts presented in the book. … Safe adaptive control by Stefanovic and Safonov may be recommended to any control engineer active in the adaptive control field.” (Jacek Kabziński, Mathematical Reviews, Issue 2012 b)