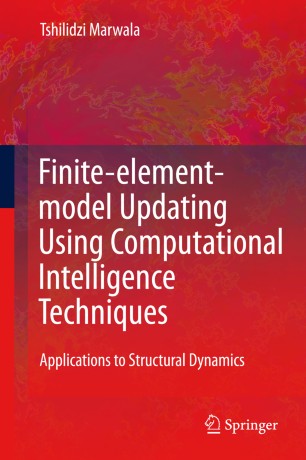 Finite element models (FEMs) are widely used to understand the dynamic behaviour of various systems. FEM updating allows FEMs to be tuned better to reflect measured data and may be conducted using two different statistical frameworks: the maximum likelihood approach and Bayesian approaches. Finite Element Model Updating Using Computational Intelligence Techniques applies both strategies to the field of structural mechanics, an area vital for aerospace, civil and mechanical engineering. Vibration data is used for the updating process. Following an introduction a number of computational intelligence techniques to facilitate the updating process are proposed; they include:

• particle swarm and genetic-algorithm-based optimization methods to accommodate the demands of global versus local optimization models;

• simulated annealing to put the methodologies into a sound statistical basis; and

• response surface methods and expectation maximization algorithms to demonstrate how FEM updating can be performed in a cost-effective manner; and to help manage computational complexity.

Based on these methods, the most appropriate updated FEM is selected using the Bayesian approach, a problem that traditional FEM updating has not addressed. This is found to incorporate engineering judgment into finite elements systematically through the formulations of prior distributions. Throughout the text, case studies, specifically designed to demonstrate the special principles are included. These serve to test the viability of the new approaches in FEM updating. Finite Element Model Updating Using Computational Intelligence Techniques analyses the state of the art in FEM updating critically and based on these findings, identifies new research directions, making it of interest to researchers in strucural dynamics and practising engineers using FEMs. Graduate students of mechanical, aerospace and civil engineering will also find the text instructive.

Tshilidzi Marwala is the Executive Dean of the Faculty of Engineering and the Built Environment at the University of Johannesburg. He was previously the Adhominem Professor of Electrical Engineering as well as the Carl and Emily Fuchs Chair of Systems and Control Engineering at the University of the Witwatersrand. He is a Fellow of the Royal Society of Arts as well as the Royal Statistical Society. He holds a PhD in Engineering from the University of Cambridge and a PLD from Harvard University in the USA. He was a post-doctoral research associate at Imperial College working in the general area of computational intelligence. He has been a visiting fellow at Harvard University and Cambridge University. His research interests include the application of computational intelligence to mechanical. civil, aerospace and biomedical engineering. Professor Marwala has made fundamental contributions to engineering including the development of the concept of pseudo-modal energies and the development of Bayesian framework for solving engineering problems such as finite element model updating. He has supervised 40 masters and PhD students many of whom have proceeded to distinguish themselves at universities such as Harvard, Oxford and Cambridge. He has published over 200 papers in journals such as the American Institute of Aeronautics and Astronautics Journal, proceedings and book chapters. He has published two books: Computational Intelligence for Modelling Complex Systems published by Research India Publications as well as Computational Intelligence for Missing Data Imputation, Estimation, and Management: Knowledge Optimization Techniques published by the IGI Global Publications (New York). His work has appeared in prestigious publications such as New Scientist. He is a senior member of the IEEE.