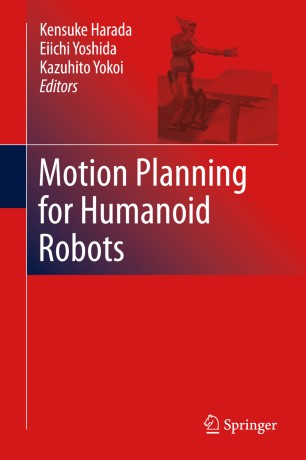 Research on humanoid robots has been mostly with the aim of developing robots that can replace humans in the performance of certain tasks. Motion planning for these robots can be quite difficult, due to their complex kinematics, dynamics and environment. It is consequently one of the key research topics in humanoid robotics research and the last few years have witnessed considerable progress in the field. Motion Planning for Humanoid Robots surveys the remarkable recent advancement in both the theoretical and the practical aspects of humanoid motion planning. Various motion planning frameworks are presented in Motion Planning for Humanoid Robots, including one for skill coordination and learning, and one for manipulating and grasping tasks. The problem of planning sequences of contacts that support acyclic motion in a highly constrained environment is addressed and a motion planner that enables a humanoid robot to push an object to a desired location on a cluttered table is described. The main areas of interest include: • whole body motion planning, • task planning, • biped gait planning, and • sensor feedback for motion planning. Torque-level control of multi-contact behavior, autonomous manipulation of moving obstacles, and movement control and planning architecture are also covered. Motion Planning for Humanoid Robots will help readers to understand the current research on humanoid motion planning. It is written for industrial engineers, advanced undergraduate and postgraduate students.