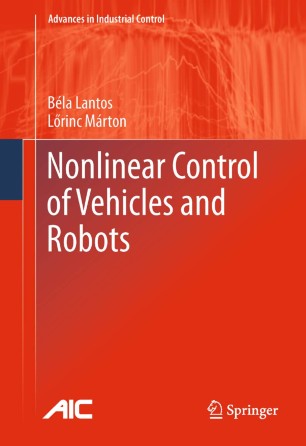 Nonlinear Control of Vehicles and Robots

Nonlinear Control of Vehicles and Robots develops a unified approach to the dynamic modeling of robots in terrestrial, aerial and marine environments. To begin with, the main classes of nonlinear systems and stability methods are summarized. Basic nonlinear control methods useful in manipulator and vehicle control – linearization, backstepping, sliding-mode and receding-horizon control – are presented. Formation control of ground robots and ships is discussed.

Theoretical (guaranteed stability, guaranteed tracking precision, boundedness of all signals in the control loop) and practical (implementability) aspects of the control algorithms under discussion are detailed. Examples are included throughout the book allowing the reader to apply the control and modeling techniques in their own research and development work. Some of these examples demonstrate state estimation based on the use of advanced sensors such as Inertial Measurement System, Global Positioning System and vision systems as part of the control system.

Nonlinear Control of Vehicles and Robots will interest academic researchers studying the control of robots and industrial research and development engineers and graduate students wishing to become familiar with modern control algorithms and modeling techniques for the most common mechatronics systems: vehicles and robot manipulators.

Professor Béla Lantos is based at Budapest University of Technology and Economics, and is lead researcher for leads many scientific grants related to robot and vehicle control. Currently, He leads the ‘Advanced Control Theory and Artificial Intelligence Techniques of Autonomous Ground, Aerial, and Marine Robots’ research group, financed by Hungarian National Research program under grant No. OTKA K 71762.

Lorinc Márton is an assistant lecturer at Sapientia Hungarian University of Transylvania and is a grantee of Janos Bolyai postdoctoral scholarship, financed by the Hungarian Academy of Sciences. He is also a senior researcher in the OTKA K 71762 research program.

“The presented book first briefly outlines the most important nonlinear control algorithms that can be applied for the control of mechanical systems. … The book is aimed at researchers who are interested in modern control algorithms and advanced modeling techniques of the most common mechatronic systems: vehicles and robots.” (Bojidar Cheshankov, Zentralblatt MATH, Vol. 1236, 2012)