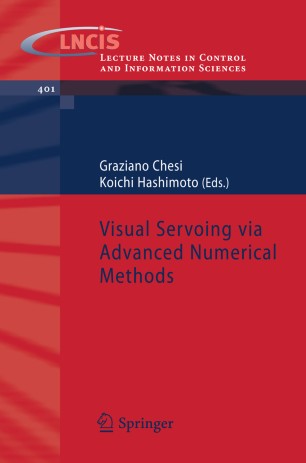 Robots able to imitate human beings have been at the core of stories of science?ctionaswellasdreamsofinventorsforalongtime.Amongthe various skills that Mother Nature has provided us with and that often go forgotten, the ability of sight is certainly one of the most important. Perhaps inspired by tales of Isaac Asimov, comics and cartoons, and surely helped by the progress of electronics in recent decades, researchers have progressively made the dream of creating robots able to move and operate by exploiting arti?cial vision a concrete reality. Technically speaking, we would say that these robots position themselves and their end-e?ectors by using the view provided by some arti?cial eyes as feedback information. Indeed, the arti?cial eyes are visual sensors such as cameras that have the function to acquire an image of the environment. Such an image describes if and how the robot is moving toward the goal and hence constitutes feedback information. This procedure is known in robotics with the term visual servoing, and it is nothing else than an imitation of the intrinsic mechanism that allows human beings to realize daily tasks such as reaching the door of the house or grasping a cup of co?ee.