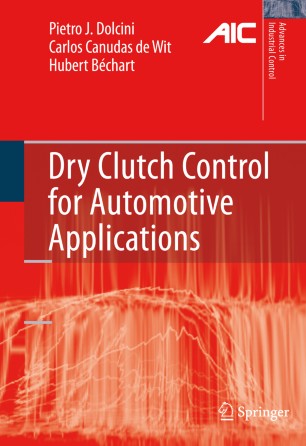 The comfort of a car as perceived by the driver can be as important to its commercial success as its performance and fuel efficiency. Modern engines deliver increased torque and there is a current trend to reduce transmission-shaft stiffness, both phenomena militating against maintaining, let alone increasing, ride comfort.

Dry Clutch Control for Automotive Applications analyses the control of a part of the powertrain which has a key role in ride comfort during standing-start and gear-shifting manoeuvres. The mechanical conception of the various elements in the driveline has long since been optimised so this book takes a more holistic system-oriented view of the problem featuring:

Dry Clutch Control for Automotive Applications will be essential reading for automotive engineers working on model design and contains much to interest the academic researcher with its combination of theoretical results and application in the important and widely studied field of automotive engineering and control.

Professor Canudas-de-Wit was born in Villahermosa, Tabasco, Mexico in 1958. He received his B.Sc. degree in electronics and communications from the Technological Institute of Monterrey, Mexico in 1980. In 1984 he received his M.Sc. in the Department of Automatic Control, Grenoble, France. In 1985 he was visiting researcher at Lund Institute of Technology, Sweden. In 1987 he received his Ph.D. in automatic control from the Polytechnic of Grenoble (Department of Automatic Control), France. Since then he has been working at the same department as "Directeur de Recherche at the CNRS", where he teaches and conducts research in the area of nonlinear control of mechanical systems, and on networked controlled systems. His research topics includes: vehicle control, adaptive control, identification, control of walking robots, systems with friction, AC and CD drives, and networked controlled systems. He has established several industrial collaboration projects with major French companies (FRAMATOME, EDF, CEA, IFREMER, RENAULT, SCHNEIDER, ILL). He has written a book in 1988 on adaptive control of partially known systems: theory and applications (Elsevier). In 1991, he edited Advanced Robot Control (978-3-540-54169-1), in Lecture Notes in Control and Information Sciences and, in 1997, Theory of Robot Control (978-3-540-76054-2) in Communications and Control Engineering. He was an associate editor of IEEE Transactions on Automatic Control, from 1992, to 1997, and of Automaticafrom 1999, to 2002. His research publications include: more than 120 International conference papers, and more than 47 published papers in international journals. He has supervised 20 Ph. D. students.

“The present book encourages the technology transfer in control engineering, by analyzing the control of a part of the power train, which has a key role in ride comfort. … The book could be of great interest to engineers working in automotive design as well as to academic researchers, due to the combination of theoretical results and interesting applications to the automotive control.” (Mihail Megan, Zentralblatt MATH, Vol. 1216, 2011)
Buy options