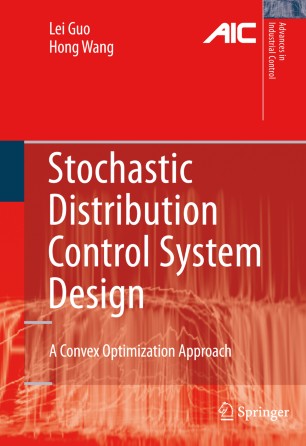 An important recent development in SDC-related problems is the establishment of intelligent SDC models and the intensive use of linear-matrix-inequality-based (LMI-based) convex optimization methods. Within this theoretical framework, control parameter determination can be designed and stability and robustness of closed-loop systems can be analyzed. Stochastic Distribution Control System Design describes the new framework of SDC system design and provides a comprehensive description of the modelling of controller design tools and their real-time implementation. The book starts with a review of current research on SDC and moves on to some basic techniques for modelling and controller design of SDC systems. This is followed by a description of controller design for fixed-control-structure SDC systems, PDF control for general input- and output-represented systems, filtering designs, and fault detection and diagnosis (FDD) for SDC systems. Many new LMI techniques being developed for SDC systems are shown to have independent theoretical significance for robust control and FDD problems.

This monograph will be of interest to academic researchers in statistical, robust and process control, and FDD, process and quality control engineers working in industry and as a reference for graduate control students.

Following Professor Guo's previous work on stochastic distribution control at UMIST, his recent research is mainly focused on the new developments of non-Gaussian filtering algorithms for signal processing and the shape control of stochastic distributions using LMIs. This includes the developments of nonlinear observers and LMI techniques for adaptive tuning rules for nonlinear systems.

Professor Lei Guo will (with John Bailleul of Boston University) be general chair of the IEEE Conference on Decision and Control and Chinese Control Conference being held jointly in Shanghai in December 2009.

Prof Wang is a fellow of IEE, fellow of InstMC and IEEE Senior Member, and acted as an associate editor for the leading control theory journal (IEEE Transactions on Automatic Control), board member for 4 international journals, and a member of the IFAC Safeprocess Committee, the IFAC Adaptive and Learning Systems Commitee and a member of the IFAC Stochastic Systems Committee. He is the originator of probability density function shape control and has published 190 papers in international journals and conferences (25 invited papers). He is the leading author of 3 books.

“The book deals with numerous methods of the design of stochastic distribution control systems. … It includes the recent results and presents the dynamic development of research in this field. Since the stochastic distribution control is an interesting approach as well from theoretical point of view as in many applications the publishing of this book seems to be very valuable. … The book provides complementary material for graduate courses.” (Leslaw Socha, Zentralblatt MATH, Vol. 1226, 2012)