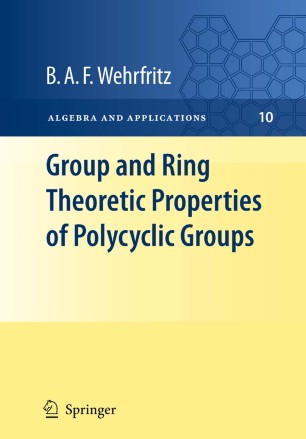 Part of the Algebra and Applications book series (AA, volume 10)

The book is not intended to be encyclopedic. Instead, it is a study manual for graduate students and researchers coming into contact with polycyclic groups, where the main lines of the subject can be learned from scratch by any reader who has been exposed to some undergraduate algebra, especially groups, rings and vector spaces. Thus the book has been kept short and readable with a view that it can be read and worked through from cover to cover. At the end of each topic covered there is a description without proofs, but with full references, of further developments in the area. The book then concludes with an extensive bibliography of items relating to polycyclic groups.

“The book under review consists of 10 chapters and is devoted to the systematic study of polycyclic groups from the beginning in the late 1930’s up to now. … The book is written clearly, with a high scientific level. … It is quite accessible to research workers not only in the area of group theory, but also in other areas, who find themselves, involved with polycyclic groups. The Bibliography is rich and reflects the development of the theory from very early time up to now.” (Bui Xuan Hai, Zentralblatt MATH, Vol. 1206, 2011)
Buy options