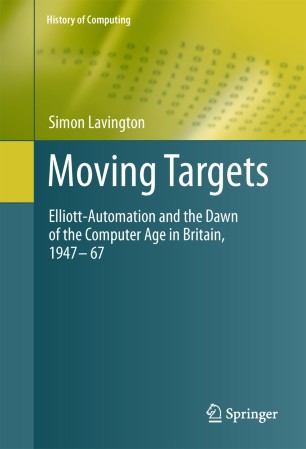 Elliott-Automation and the Dawn of the Computer Age in Britain, 1947 – 67

The Elliott-Automation company was an active participant in the birth of the information age in Britain. By 1961, the company was supplying 50% of the digital computers delivered to UK customers in that year.  Yet by the end of that decade, Elliott-Automation had effectively disappeared in a flurry of takeovers, leaving little apparent trace of the technical excellence that had once characterised the name Elliott.

Moving Targets charts the gradual take-up of information technology in Britain, as seen through the eyes of one innovative company.  The book examines how the dawn of the digital computer age in Britain took place at various times for different applications, from early government-sponsored work on secret defence projects, to the growth of the market for Elliott computers for civil applications.

This unique text will be of great interest to historians of technology and business, and will also appeal to the general reader curious about the emergence of digital computing in Britain and the work of the previously unsung computer pioneers of the Elliott-Automation laboratories at Borehamwood.

Simon Lavington is Emeritus Professor of Computer Science at the University of Essex. Among his many publications is the book Early British Computers.