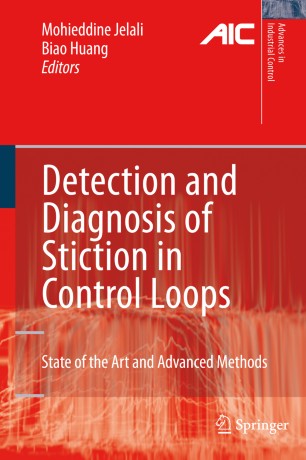 Detection and Diagnosis of Stiction in Control Loops

State of the Art and Advanced Methods

The presence of non-linearities, such as stiction and deadband, places limits on the performance of control valves. Indeed, in the process industries, stiction is the most common valve problem, and over the last decade numerous different techniques for overcoming it have been proposed.

Detection and Diagnosis of Stiction in Control Loops represents a comprehensive presentation of these methods, including their principles, assumptions, strengths and drawbacks. Guidelines and working procedures are provided for the implementation of each method and MATLAB®-based software can be downloaded from www.ualberta.ca/~bhuang/stiction-book enabling readers to apply the methods to their own data. Methods for the limitation of stiction effects are proposed within the general context of:

• stiction detection and diagnosis; and

The state-of-the-art algorithms presented in this book are demonstrated and compared in industrial case studies of diverse origin – chemicals, building, mining, pulp and paper, mineral and metal processing. Industry-based engineers will find the book to be valuable guidance in increasing the performance of their control loops while academic researchers and graduate students interested in control performance and fault detection will discover a wealth of static-friction-related research and useful algorithms.

Mohieddine Jelali is Project Manager and Vice-Head of Department of Plant and System Technology at VDEh Betriebsforschungsinstitut (BFI), the Applied Research Institute of the German Steel Industry. He received his Dipl. Eng. and Dr. Eng. degrees in Mechanical Engineering from the University of Duisburg, Germany, in 1993 and 1997, respectively. Before joining BFI in 1999, he worked for three years with Mannesmann Demag Metallurgy as an R and D Engineer on the design and application of advanced process control systems in rolling mills. For more than a decade Doctor Jelali has worked in the areas of advanced (model-predictive) control and control performance monitoring as the initiator and coordinator of multinational research projects in the field of metal processing. He has filed patents related to this. M. Jelali has received the Medal of the Werner-von-Siemens-Stiftung for his excellent research in the field of control in the rolling. He has published about 40 papers on process control and related topics in different international journals and conference proceedings. He is the principal author of Hydraulic Servo-systems: Modelling, Identification and Control (978-1-85233-692-9) published by Springer in 2002. He is a member of VDEh, VDI, GMA, and DUG.

Biao Huang is a Professor and researcher in system identification and control performance monitoring. He has received a number of awards for his contributions in these areas including Germany’s Alexander von Humboldt Research Fellowship award, Canadian Chemical Engineeriing Society’s Syncrude Canada Innovation Award, University of Alberta’s McCalla Professorship award, and Petro-Canada Young Innovator Award, and has been the recipient of best paper award for Journal of Process Control. Biao Huang has worked specifically in systems and control over the last 20 years. He is one of the leading experts in control loop performance monitoring, and has made contributions in this area including a book published by Springer. Biao Huang applied his expertise extensively in industrial practice particularly in oil sands industry. His research contributions in control performance monitoring have enjoyed widely applications in chemical, petrochemical, oil and gas, mineral processing, and pulp and paper industries throughout the world. He has served on a number of national and international engineering and science communities including as Chair of CSChE’s System and Control Division, Associate Editor of Control Engineering Practice, Associate Editor of CJChE. Since 1997 Biao Huang has published over 100 refereed papers in international journals and conference proceedings. He has been invited to speak in a number of institutions as well as workshops worldwide. He is the author of Performance Assessment of Control Loops (978-1-85233-639-4) and Dynamic Modeling, Predictive Control and Performance Monitoring (978-1-84800-232-6).

“This book is a collection of contributions from several researchers involved in automatic detection and diagnosis of static friction (stiction) in control loops where the process is manipulated by valves. … The book aims to provide researchers and practicing engineers with a survey of the state-of-the-art in this area of control engineering.” (IEEE Control Systems Magazine, Vol. 30, October, 2010)