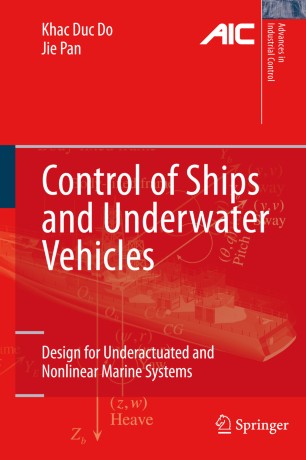 Control of Ships and Underwater Vehicles

Most ocean vessels are underactuated but control of their motion in the real ocean environment is essential. Control of Ships and Underwater Vehicles concentrates on the control of underactuated ocean vessels both surface and submarine. Having more degrees of freedom to be controlled than the number of independent control inputs these vessels give rise to numerous challenges within the area of applied nonlinear control which are of growing concern because of their prevalence.

Starting with a review of the necessary background on ocean-vessel dynamics and nonlinear control theory, the authors’ systematic approach is based on various nontrivial coordinate transformations coupled with advanced nonlinear control design methods building on Lyapunov’s direct method, backstepping, and parameter projection techniques. This strategy is then used for the development and analysis of a number of ocean-vessel control systems with the aim of achieving advanced motion control tasks including stabilization, trajectory-tracking, path-tracking and path-following.

Control of Ships and Underwater Vehicles offers the reader:

• efficient designs for the practical implementation of controllers on underactuated ocean vessels;

• extensive numerical simulations and real-time implementations of the control systems designed on a scale-model ship for each controller developed to illustrate their effectiveness and afford practical guidance; and

• general methods and strategies for solving nonlinear control problems of other underactuated systems including underactuated land and aerial vehicles.

Written for researchers in and practitioners of control engineering applied to marine technology this monograph provides a variety of solutions to advanced feedback control topics of practical significance in underactuated ocean vessels. Its self-contained, from-the-basics style also makes it a useful resource for graduate students in marine control and readers interested in learning through self-study.

Doctor Do’s major contribution to systems and control is his research on control of systems subject to nonholonomic constraints such as underactuated mechanical systems including surface ships, underwater vehicles, mobile robots and aircraft, and control of networks of multiple vehicles. He has made significant contribution to the understanding dynamics and developing novel methods to design controllers for these systems. For nonholonomic systems with strong nonlinear drifts and unknown parameters, he developed a method called "input-to-state scaling" to design a global asymptotic stabilizer. For land, air and ocean vehicles, he proposed various solutions to the problems of stabilization, trajectory-tracking and path-following. He introduced a methodology called "dynamics from a different view", which results in several ways to derive coordinate transformations to overcome difficulties in controlling these vehicles. His involvement with Western Australia ship- and air-vehicle-building industries (Austal, Shipdynamics, Entecho) has enriched his industrial activities and practical experience. Currently, he is a senior lecturer in the School of Mechanical Engineering at the University of Western Australia. He teaches "Advanced Control Engineering" and "Navigation and Marine Control Systems" units.

Professor Jie Pan is the Director of the Centre for Acoustics, Dynamics and Vibration at the School of Mechanical Engineering, University of Western Australia. His contribution to the field of applied control was initially in active control of noise and structural vibration. Since 1999, he and his research team have worked on the control of ocean vessel vibration and motion, where he played a role not just as a team leader and project organiser, but also provided physical insight into the understanding of system dynamics and their role in controller design. He also established several fundamental and industrial research projects on active control of marine vessels’ vibration, and active vibration control of marine risers, from which several outstanding PhD, Masters and final-year theses were generated and some problems of ride control systems in the Western Australian ship-building industry were solved. Many results described in this monograph are the products or by-products of those projects and thesis work. Professor Pan’s teaching covers classical control, advanced control and mechatronics, vibration and signal processing, and acoustical engineering.