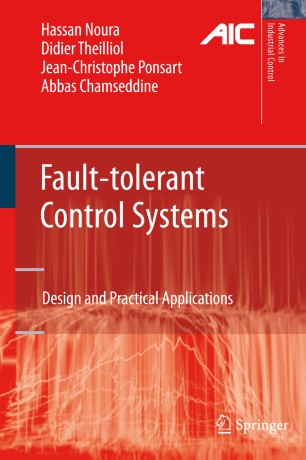 Fault-tolerant Control Systems reports the development of fault diagnosis and fault-tolerant control (FTC) methods with their application to real plants. After an introduction to fault diagnosis and FTC, a chapter on actuators and sensors in systems with varying degrees of nonlinearity leads to three chapters in which the design of FTC systems is given thorough coverage for real applications:

• a winding machine typifying a subsystem in various sheet and film processes;

• a hydraulic three-tank system representative of those used widely in chemical plants; and

Actuator and sensor faults are accommodated within the control-law design and the integration of fault diagnosis models in the FTC systems described. Commentary is given on the recent results presented. Critical failures – the loss of system observability from total loss of a sensor and of controllability from complete loss of an actuator – are considered. Linearized systems around an operating point and nonlinear systems are discussed and illustrated. A complete simulation platform of the three-tank system, in closed-loop, with or without actuator and sensor faults, is provided for the use of the reader via download from www.springer.com/978-1-84882-652-6.

With its emphasis on real application, Fault-tolerant Control Systems makes an important contribution to the literature on FTC and will be of significant assistance to practicing control engineers with problems of this nature to solve. The book will also be of use to academic researchers and graduate students interested in FTC, bringing to their attention the need to adapt their methods for implementation and suggesting ways in which this can be done.

“An introduction to model-based fault detection and isolation (FDI) and fault tolerant control (FTC). … The book can easily be read and understood and should be particularly useful for graduate students and practicing control engineers.” (Adrian-Mihail Stoica, Mathematical Reviews, Issue 2011 i)

“The present monograph is one of very few books in this area that considers practical aspects of fault-tolerant control … . the authors have successfully presented some of the most important concepts and procedures in fault-tolerant control system design and analysis. They have done this with elegance of mathematics, as well as in-depth physical understanding of the limitations of handicapped actuators and sensors.” (Romeo Negrea, Zentralblatt MATH, Vol. 1215, 2011)