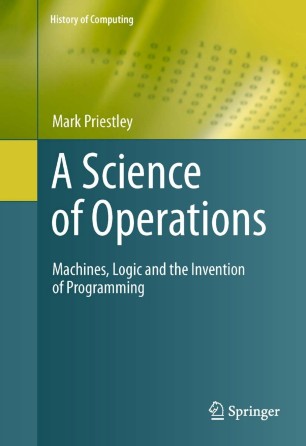 A Science of Operations

Machines, Logic and the Invention of Programming

Today, computers fulfil a dazzling array of roles, a flexibility resulting from the great range of programs that can be run on them.

A Science of Operations examines the history of what we now call programming, defined not simply as computer programming, but more broadly as the definition of the steps involved in computations and other information-processing activities.  This unique perspective highlights how the history of programming is distinct from the history of the computer, despite the close relationship between the two in the 20th century.  The book also discusses how the development of programming languages is related to disparate fields which attempted to give a mechanical account of language on the one hand, and a linguistic account of machines on the other.

This fascinating text offers a new viewpoint for historians of science and technology, as well as for the general reader.  The historical narrative builds the story in a clear and logical fashion, roughly following chronological order.