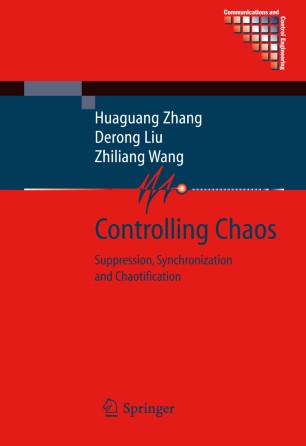 Controlling Chaos offers its reader an extensive selection of techniques to achieve three goals: the suppression, synchronization and generation of chaos, each of which is the focus of a separate part of the book. The text deals with the well-known Lorenz, Rössler and Hénon attractors and the Chua circuit, and with less celebrated novel systems. Modeling of chaos is accomplished using difference equations and ordinary and time-delayed differential equations. The methods directed at controlling chaos benefit from the influence of advanced nonlinear control theory: inverse optimal control is used for stabilization; exact linearization for synchronization; and impulsive control for chaotification. Notably, a fusion of chaos and fuzzy systems theories is employed, with the Takagi–Sugeno model and the authors’ own fuzzy hyperbolic model utilized in the modeling and control of chaotic systems. Time-delayed systems are also studied with many synchronization methods being explored. All the results presented are general for a broad class of chaotic systems.

This monograph is self-contained with introductory material providing a review of the history of chaos control and the necessary mathematical preliminaries for working with dynamical systems.

Controlling Chaos will be of interest to academics from electrical, systems, mechanical and chemical engineering backgrounds working in control theory related to nonlinear dynamical and chaotic systems and to graduate students of chaos control.

“In this book the authors present state-of-the-art techniques for active control and synchronization of chaotic systems. … the book is written in a clear and concise fashion and each chapter contains a list of up-to-date references. … The book should be valuable to graduate students and faculty in engineering, or to applied mathematicians and physicists interested in the field of nonlinear dynamics and control theory. … It is recommended for individuals as well as libraries.” (Subhash C. Sinha, International Journal of Acoustics and Vibration, Vol. 16 (1), 2011)
Buy options