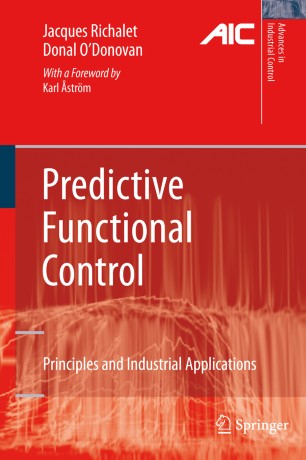 The demands of the modern economic climate have led to a dramatic increase in the industrial application of model-based predictive control techniques. In fact, apart from PID, predictive control is probably the most popular control approach in use today.

The predictive functional control (PFC) technique was first used to develop a model-based predictive controller that was easy to understand, implement and tune from an instrumentation engineer’s perspective. In the forty years since, there have been thousands of successful applications of PFC controllers in a large and diverse group of industries.

• a fundamental understanding of the principles associated with PFC;

• the basic PFC control equations to be implemented in all programmable logic controllers or digital control systems in block programming form; and

In addition, some new features arising from the needs of the process industries are reported along with many examples of industrial applications.

This book is intended for technical staff in the process industries, familiar with classical control techniques, who need to take up the challenges posed by today’s economic environment; engineering graduate students requiring a background in modern control techniques; and industrial managers who require an overview of the PFC technique with a view to assessing its suitability for use in future projects.

Jaques Richalet was born in Versailles, France, in 1936.

He studied aeronautical engineering at ENSAE in Paris and graduated in 1960. He then went to Berkeley, USA, where he obtained his MSc degree under the guidance of Prof. Zadeh. Back in Paris he worked in the field of applied mathematics and received his PhD in 1965.

Since then he has been active in the areas of process identification, modelling and diagnosis methods such as predictive maintenance. Applications range from petrochemical and food industry to faster systems as encountered in the automotive and defense sector.

He was a manager of ADERSA till 2001 and is still working as a consultant for modelling and predictive control. He now lives in Versailles in France.

In his academic career he published more than fifty articles as well as three books on identification and predictive control. He has been president of the National Committee of Automatic Control and chairman of EEC Interest Group "CIDIC". For his achievements he was awarded the status as Chevalier de l'Ordre National du Merite and many researchers would probably agree to his being called "the grandfather of predictive control". He received the Nordic Process Control Award in 2007. He is now retired.