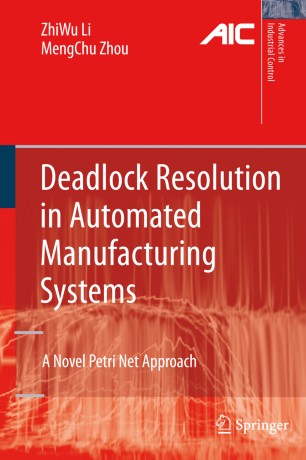 Deadlock problems in flexible manufacturing systems (FMS) have received more and more attention in the last two decades. Petri nets are one of the more promising mathematical tools for tackling deadlocks in various resource allocation systems. In a system modeled with Petri nets, siphons are tied to the occurrence of deadlock states as a structural object. The book systematically introduces the novel theory of siphons, traps, elementary and dependent siphons of Petri nets as well as the deadlock control strategies for FMS developed from it. Deadlock prevention methods are examined comparatively. Many FMS examples are presented to demonstrate the concepts and results of this book, ranging from the simple to the complex. Importantly, to inspire and motivate the reader’s interest in further research, a number of interesting and open problems in this area are proposed at the end of each chapter.

Deadlock Resolution in Automated Manufacturing Systems is directed to control, computer, electrical, mechanical, and industrial engineers, researchers and scientists. It will be useful for designers in the automation and control disciplines in industry and academia who need to develop the control methods, tools and software to improve the performance of automated flexible manufacturing systems.

ZhiWu Li received his B.S., M.S., and Ph.D. degrees all from Xidian University, Xi'an, China, in 1989, 1992, and 1995, respectively. He joined Xidian University, Xi'an, in 1992, where he is currently Professor of the School of Electro-Mechanical Engineering. He has over 100 publications including a book chapter in Deadlock Resolution in Computer-Integrated Systems, New York: Marcel-Dekker, 2005. From June 2002 to July 2003, he was a Visiting Professor at the Systems Control Group, Department of Electrical and Computer Engineering, University of Toronto, Canada. From February 2007 to February 2008, he was a Visiting Scientist at the Laboratory for CAD & Lifecycle Engineering, Department of Mechanical Engineering, Technion - Israel Institute of Technology, Technion City, Haifa, Israel. Dr. Li served as a member of the Program Committee of the 2005 IEEE International Conference on Networking, Sensing, and Control, 2007 IEEE International Conference on Systems, Man and Cybernetics and the 2008 International Conference on Applications and Theory of Petri Nets. He is a member of the International Advisory Committee of the 10th International Conference on Automation Technology. He is General Co-Chair of the IEEE Conference on Automation Science and Engineering. Dr. Li is a member of the Discrete Event Systems Technical Committee of IEEE Systems, Man, and Cybernetics Society. He serves as a frequent reviewer for 15+ international journals and many international conferences. He is Senior Member of IEEE and recipient of the Alexander von Humboldt Research Grant from Alexander von Humboldt Foundation, Germany.

MengChu Zhou received his B.S. from Nanjing University of Science and Technology, M.S. from Beijing Institute of Technology, and Ph.D. from Rensselaer Polytechnic Institute. He joined New Jersey Institute of Technology (NJIT) in 1990, and is currently a Professor of Electrical and Computer Engineering and Director of the Discrete-Event Systems Laboratory. His interests are in computer-integrated systems, Petri nets, networks, and manufacturing. He has 300+ publications including 6 books and 120+ journal papers. He is the Managing Editor of IEEE Transactions on Systems, Man and Cybernetics (SMC), Associate Editor of IEEE Transactions on Automation Science and Engineering, IEEE Transactions on SMC: Part A and IEEE Transactions on Industrial Informatics, and Editor-in-Chief of International Journal of Intelligent Control and Systems. He has served as General and Program Chair of many international conferences. Dr. Zhou has led or participated in 36 research and education projects with a total budget over $10M, funded by NSF, DoD, and industry. He was the recipient of the CIM University-LEAD Award by the Society of Manufacturing Engineers, the Perlis Research Award by NJIT, the Humboldt Research Award for US Senior Scientists, and the Distinguished Lecturer of IEEE SMC Society. He has been invited to lecture in Australia, Canada, China, France, Germany, Hong Kong, Italy, Japan, Korea, Mexico, Taiwan, and US. He was founding chair of the Discrete Event Systems Technical Committee of the IEEE SMC Society, and Chair (founding) of the Semiconductor Manufacturing Automation Technical Committee of the IEEE Robotics and Automation Society. He is a life member of the Chinese Association for Science and Technology-USA and served as its President in 1999. He is a Fellow of the IEEE.

“Students, researchers, and practicing engineers interested in flexible manufacturing systems that can be described as discrete-event systems will find this book of interest. The book deals with Petri nets that have been widely used to model these systems. The focus is on deadlocks, a highly undesirable situation.” (IEEE Control Systems Magazine, Vol. 30, August, 2010)