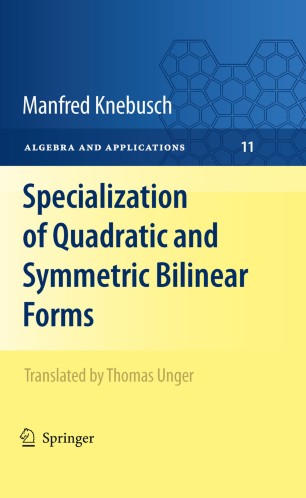 Part of the Algebra and Applications book series (AA, volume 11)

The specialization theory of quadratic and symmetric bilinear forms over fields and the subsequent generic splitting theory of quadratic forms were invented by the author in the mid-1970's. They came to fruition in the ensuing decades and have become an integral part of the geometric methods in quadratic form theory. This book comprehensively covers the specialization and generic splitting theories. These theories, originally developed mainly for fields of characteristic different from 2, are explored here without this restriction. In this book, a quadratic form φ over a field of characteristic 2 is allowed to have a big quasilinear part QL(φ) (defined as the restriction of φ to the radical of the bilinear form associated to φ), while in most of the literature QL(φ) is assumed to have dimension at most 1. Of course, in nature, quadratic forms with a big quasilinear part abound. In addition to chapters on specialization theory, generic splitting theory and their applications, the book's final chapter contains research never before published on specialization with respect to quadratic places and will provide the reader with a glimpse towards the future.

“In the present book Knebusch develops a theory of specialization covering all the situations occurring by combining the cases when the characteristic of the field L is equal or unequal to 2 with the cases when the forms are either symmetric bilinear or quadratic and have a prescribed type of reduction under the place. … The book is a welcome addition to the literature on quadratic forms supporting the tendency of presenting results for forms over all fields independently of the field characteristic.” (K. Szymiczek, Mathematical Reviews, Issue 2011 h)

“The author developed a specialization theory and a subsequent generic splitting theory of quadratic and symmetric bilinear forms over fields. … This book comprehensively covers the theory without the restriction of the characteristic. … offers results on specialization with respect to quadratic places providing a look on further research. A book for the specialist!” (H. Mitsch, Monatshefte für Mathematik, Vol. 164 (3), November, 2011)

“This is an important monograph in which the author has done an excellent job putting together in one place many important results on specialization of quadratic and bilinear forms and generic splitting of quadratic forms that were previously dispersed in several research articles. It belongs on the shelf of any mathematician interested on the algebraic, geometric and arithmetic aspects of quadratic forms. The book under review joins the class of the ever expanding literature on quadratic forms … .” (Feline Zaldivar, The Mathematical Association of America, January, 2011)

“The present book represents the state of the art in the theory of specialization of quadratic forms, containing a substantial amount of previously unpublished new results. It is a welcome addition to the literature as this is the first monograph in which this original and important approach to the algebraic theory of quadratic forms has been given such a comprehensive treatment.” (Detlev Hoffmann, Zentralblatt MATH, Vol. 1203, 2011)