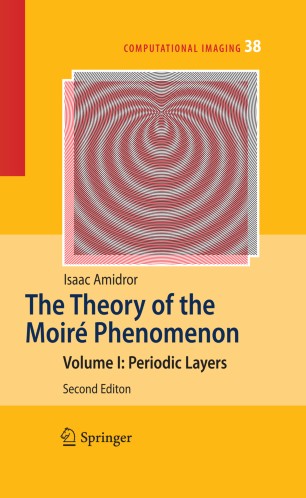 This is a new, revised and updated edition of the original book by Isaac Amidror. It presents the most comprehensive and methodical work on the theory of the moiré phenomenon, providing a full general-purpose and application-independent exposition of this fascinating effect. Based on the Fourier theory, it leads the reader through the various phenomena which occur in the superposition of repetitive layers, both in the image and in the spectral domains. The first chapters of the book present the basic theory which covers the superposition of monochrome, periodic layers. In later chapters the theory is extended to the even more interesting cases of polychromatic moirés and moirés between repetitive, non-periodic layers. Throughout the whole text the book favours a pictorial, intuitive approach which is supported by mathematics, and the discussion is accompanied by a large number of figures and illustrative examples, some of which are visually attractive and even spectacular.

This book is intended for students, scientists, engineers and any readers who wish to widen their knowledge of the moiré effect. It also offers a beautiful demonstration of the Fourier theory and its relationship with other fields of mathematics and science. The prerequisite mathematical background is limited to an elementary familiarity with calculus and with the Fourier theory.