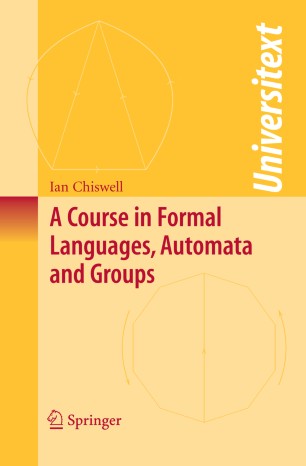 A Course in Formal Languages, Automata and Groups

Based on the author’s lecture notes for an MSc course, this text combines formal language and automata theory and group theory, a thriving research area that has developed extensively over the last twenty-five years.

The aim of the first three chapters is to give a rigorous proof that various notions of recursively enumerable language are equivalent. Chapter One begins with languages defined by Chomsky grammars and the idea of machine recognition, contains a discussion of Turing Machines, and includes work on finite state automata and the languages they recognise. The following chapters then focus on topics such as recursive functions and predicates; recursively enumerable sets of natural numbers; and the group-theoretic connections of language theory, including a brief introduction to automatic groups. Highlights include:

Enriched with precise definitions, clear and succinct proofs and worked examples, the book is aimed primarily at postgraduate students in mathematics but will also be of great interest to researchers in mathematics and computer science who want to learn more about the interplay between group theory and formal languages.

A solutions manual is available to instructors via www.springer.com.

"This short work by Chiswell … covers formal languages, automata theory, and the word problem in group theory. This content is bound together by the unifying theme of what is known as Church’s thesis, which states that any desirable definition of computability should coincide with recursiveness. … Several appendixes serve as homes for … distracting proofs of results needed in the main body of the text, or for solutions to selected instances of the abundant exercises. Summing Up: Recommended. Academic readers, upper-division undergraduates through researchers/faculty." (F. E. J. Linton, Choice, Vol. 46 (11), 2009)