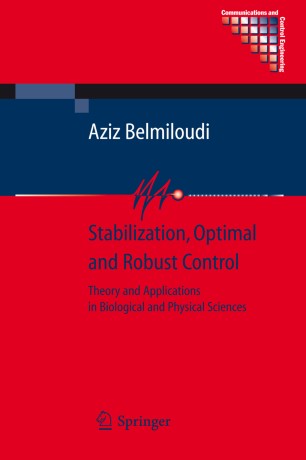 Theory and Applications in Biological and Physical Sciences

Systems governed by nonlinear partial differential equations (PDEs) arise in many spheres of study. The stabilization and control of such systems, which are the focus of this book, are based around game theory. The robust control methods proposed here have the twin aims of compensating for system disturbances in such a way that a cost function achieves its minimum for the worst disturbances and providing the best control for stabilizing fluctuations with a limited control effort.

Mathematical foundations essential for the required analysis are provided so that the book remains accessible to the non-control-specialist. Following chapters giving a general view of convex analysis and optimization and robust and optimal control, problems arising in fluid-mechanical, biological and materials-scientific systems are laid out in detail; specifically:

• mathematical treatment of nonlinear evolution systems (with and without time-varying delays);

• vortex dynamics in superconducting films and solidification of binary alloys;

The combination of mathematical fundamentals with applications of current interest will make this book of much interest to researchers and graduate students looking at complex problems in mathematics, physics and biology as well as to control theorists.

“The focus of the book is stabilization, control and fluctuation of systems governed by Partial Differential Equations (PDE), and their applications to biological and physical sciences. The techniques used are the ones of robust control theory based around game theory. … The book is of interest both for control theorist than for researchers involved in complex problems in fluid mechanics, biological systems and material sciences.” (Rosa Maria Bianchini, Zentralblatt MATH, Vol. 1169, 2009)
Buy options