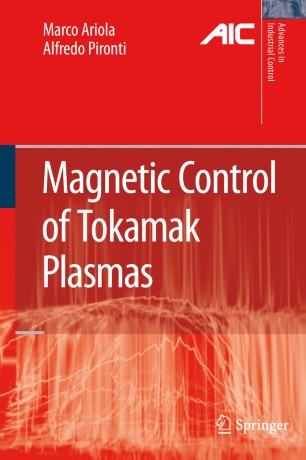 The problem of confining a plasma, with sufficiently high density and temperature, is of crucial importance if nuclear fusion is to be made usable as a form of power generation. Tokamaks – devices with a toroidal geometry – are among the most popular candidates by which such confinement can be achieved. A tokamak separates a plasma from its surroundings by means of a magnetic field generated by several coils distributed around the plasma.

The main topic of Magnetic Control of Tokamak Plasmas is the design of feedback control systems guaranteeing the stability of plasma equilibrium inside a tokamak and the regulation of the plasma position and shape during plasma pulses. Modelling and control details are presented, allowing the non-expert to understand the control problem. Starting from equations of magneto-hydro-dynamics, all the steps needed for the derivation of plasma state-space models are enumerated. The basics of electromagnetics are frequently recalled. The control problem is then described beginning with control of current and position – vertical and radial – and progressing to the more challenging shape control. The solutions proposed vary from simple PIDs to more sophisticated MIMO controllers.

Wherever possible, the various topics are rounded out with results obtained through the authors’ contributions to experiments with actual tokamaks. Mathematical details which are outside the normal province of control engineers are presented in an appendix for the interested reader.

The ideas formulated in this monograph will be of great practical help to control engineers, academic researchers and graduate students working directly with problems related to the control of nuclear fusion. They will also stimulate control researchers interested more generally in the advanced applications of the discipline.

Alfredo Pironti was born in Napoli, Italy in 1966. He received the Laurea degree cum Laude in Electronic Engineering, and the PhD in Electronic and Computing Engineering from the University of Naples Federico II in 1991 and 1995, respectively. Since 1991 he is with the Dipartimento di Informatica e Sistemistica of the University of Naples, where he currently is Associate Professor of System Theory. He has spent several periods as visiting researcher at the Max Planck Institute for Plasma Physics in Garching (Germany), the Center for Control Engineering and Computation (University of California at Santa Barbara), and at the ITER Joint Work Site of Naka (Japan). His research interests include robust control of uncertain systems, and the application of feedback control to nuclear fusion problems. He was guest-editor of the October 2005 issue of IEEE Control Systems Magazine, a special issue dedicated to the control of tokamak plasmas.

Marco Ariola is an Associate Professor at the University of Naples Parthenope in the Technology Department. From September 1998 to February 1999, he was a Visiting Scholar with the Department of Electrical and Computer Engineering of University of New Mexico, Albuquerque, NM, USA. His research interests include statistical control, robust control, control of communication networks, control of nuclear fusion devices, control of aerospace systems. He was a member of the International Program Committee of the 42nd IEEE Conference on Decision and Control held in December 2003. He has published about 90 journal papers, conference papers, articles in books and encyclopedias.

"The book offers a thorough coverage of the magnetic control of plasma in tokamaks. Tokamaks have been proved to be the most promising design for future thermonuclear reactors. … There are also descriptions of tokamaks as devices using control theory concepts. This makes the book accessible for a wide audience of readers–not only for physicists and narrow specialists." (Vyacheslav F. Gubarev, Mathematical Reviews, Issue 2009 h)

“The book presents the main features of plasma modelling and plasma control, focusing on tokamak current and future devices. Throughout two parts and nine chapters of their book, the authors model plasmas, coming back to the theory of magnetohydrodynamics. They illustrate the interest of such plasmas in various configurations. … will be useful to scientists involved in tokamaks and to engineers having in charge the control of such devices.” (Alain Brillard, Zentralblatt MATH, Vol. 1185, 2010)