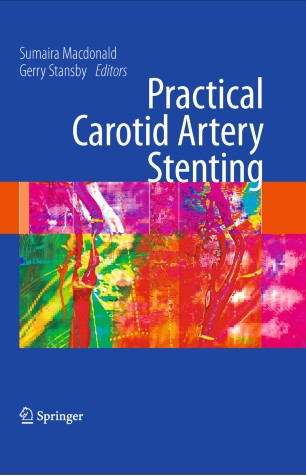 As the popularity of Carotid Artery Stenting (CAS) grows, so too does the demand in knowledge and guidance for this technically challenging and high risk procedure.

The book aids optimal outcomes during early experiences with CAS by helping to avoid many common pitfalls. The text runs through common themes of CAS such as carotid anatomy variations, material selection, imaging during CAS, pharamacological support regimes and post procedural care serving to minimise the potential risk of error and further complications.

This is an essential handbook for physicians of all backgrounds, particularly Vascular Radiologists, Neurointerventionists, Vascular Surgeons, Interventional Cardiologists, and Neurologists/Stroke Physicians.

This book is written by a number of authors from around the globe, and edited by Gerry Stansby and Sumaira Macdonald, two experts in the field of vascular radiology and surgery. Sumaira Macdonald is also responsible for the carotid artery stenting program in Newcastle making this book a reliable source of information and guidance in the domain of CAS.

Sumaira Macdonald, MBChB, MRCP, FRCR, PhD, is a Consultant Vascular Radiologist & Honorary Clinical Senior Lecturer, The Freeman Hospital, Newcastle upon Tyne, UK, who has been responsible for setting up the carotid stenting program in Newcastle. She is also involved with several trials of carotid stenting, and regularly proctors and teaches the technique nationally and internationally.

"This comprehensive overview of the field of carotid stenting includes everything from patient selection … to tips and techniques, adjunctive medical treatment, and the management of complications. … the details provided on techniques and types of catheters, wires, and stents are extremely useful to those starting out. … This book is useful for students as well as practitioners, including vascular surgeons, interventional radiologists, interventional cardiologists, and neurosurgeon. … I highly recommend this book to trainees in the field of carotid stenting." (Audrey Rosinberg, Doody’s Review Service, October, 2009)