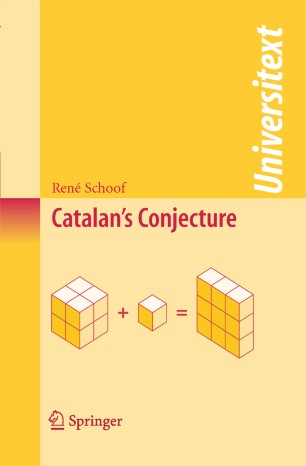 Eugène Charles Catalan made his famous conjecture – that 8 and 9 are the only two consecutive perfect powers of natural numbers – in 1844 in a letter to the editor of Crelle’s mathematical journal. One hundred and fifty-eight years later, Preda Mihailescu proved it.

Catalan’s Conjecture presents this spectacular result in a way that is accessible to the advanced undergraduate. The first few sections of the book require little more than a basic mathematical background and some knowledge of elementary number theory, while later sections involve Galois theory, algebraic number theory and a small amount of commutative algebra. The prerequisites, such as the basic facts from the arithmetic of cyclotomic fields, are all discussed within the text.

The author dissects both Mihailescu’s proof and the earlier work it made use of, taking great care to select streamlined and transparent versions of the arguments and to keep the text self-contained. Only in the proof of Thaine’s theorem is a little class field theory used; it is hoped that this application will motivate the interested reader to study the theory further.

Beautifully clear and concise, this book will appeal not only to specialists in number theory but to anyone interested in seeing the application of the ideas of algebraic number theory to a famous mathematical problem.