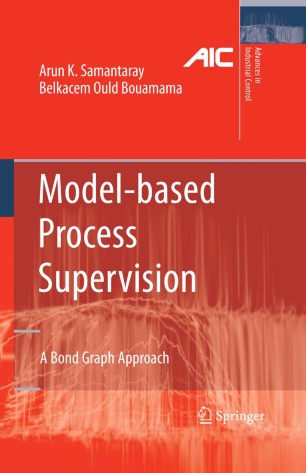 Model-based fault detection and isolation requires a mathematical model of the system behaviour. Modelling is important and can be difficult because of the complexity of the monitored system and its control architecture. The authors use bond-graph modelling, a unified multi-energy domain modelling method, to build dynamic models of process engineering systems by composing hierarchically arranged sub-models of various commonly encountered process engineering devices. The structural and causal properties of bond-graph models are exploited for supervisory systems design.

The structural properties of a system, necessary for process control, are elegantly derived from bond-graph models by following the simple algorithms presented here. Additionally, structural analysis of the model, augmented with available instrumentation, indicates directly whether it is possible to detect and/or isolate faults in some specific sub-space of the process. Such analysis aids in the design and resource optimization of new supervision platforms.

Static and dynamic constraints, which link the time evolution of the known variables under normal operation, are evaluated in real time to determine faults in the system. Various decision or post-processing steps integral to the supervisory environment are discussed in this monograph; they are required to extract meaningful data from process state knowledge because of unavoidable process uncertainties. Process state knowledge has been further used to take active and passive fault accommodation measures.

Several applications to academic and small-scale-industrial processes are interwoven throughout. Finally, an application concerning development of a supervision platform for an industrial plant is presented with experimental validation.

Model-based Process Supervision provides control engineers and workers in industrial and academic research establishments interested in process engineering with a means to build up a practical and functional supervisory control environment and to use sophisticated models to get the best use out of their process data.

Belkacem Ould Bouamama graduated in 1982 from the Institut National des Hydrocarbures et de la Chimie Boumerdes (INHC) in Process Control. He received his Ph.D. degree in 1987 from Goubkine Institute of Petroleum and Gas of Moscow. From 1988 to 1994, he was researcher and head of department of automatic control at INHC. From 1994 to 2000, he was an associate professor in control engineering at the Université des Sciences et Technolgies de Lille (France) and since then he has been a full professor at Ecole Polytechnique de Lille. Currently he heads the inter-disciplinary group on Fault Detection and Isolation using Bond Graph models at the Laboratoire d'Automatique, Génie Informatique & Signal, Lille, France. The main thrust of the research concerns modelling and monitoring of process engineering using a bond graph approach. Their application domains are mainly nuclear power plants, chemical and petrochemical processes. . He is the author of several international publications in this area and the co-author of three books in bond graph modelling and monitoring. He has written a book Modeling and Simulation in Thermal and Chemical Engineering published by Springer Verlag (3-540-66388-6).

Arun Kumar Samantaray graduated in 1989 from the College of Engineering and Technology (CET) in Mechanical Engineering. He received the masters degree in Dynamics and Contol and PhD degree in Mehanical Engineering (Rotor Dynamics) from the Indian Institute of Technology-Kharagpur, in 1991 and 1996, respectively. From 1996 to 2001, he worked as the Project Manager at the HighTech Consultants. From 2001 to 2004, he was a research scientist at Université des Sciences et Technologies de Lille (France) and thereafter; he has been an assistant professor in the Department of Mechanical Engineering at the Indian Institute of Technology, Kharagpur. He is an author of bond graph modelling software SYMBOLS and also the editor-in-chief of the bond graph forum at www.bondgraphs.com. He is the new co-author in the second edition of the book Modelling and Simulation of Engineering Systems through Bond Graphs. He is also a consultant to various industries requiring help in modelling, simulation, design, fault detection, and automation.

“This book is written for students and researchers interested in bond graph model-based control and supervision. The book presents a detailed up-to-date view of how bond graph modeling can be applied to fault diagnosis and control of engineering processes.” (IEEE Control Systems Magazine, Vol. 30, February, 2010)