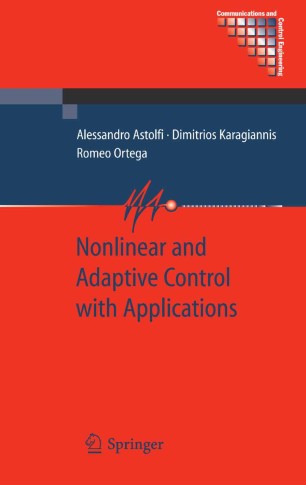 Nonlinear and Adaptive Control with Applications

Nonlinear and Adaptive Control with Applications provides a detailed treatment of the design of robust adaptive controllers for nonlinear systems with uncertainties. The authors employ a new tool based on the ideas of system immersion and manifold invariance.

Departing, in part, from the Lyapunov-function approach of classical control, new algorithms are delivered for the construction of robust asymptotically-stabilising and adaptive control laws for nonlinear systems. The methods proposed lead to modular schemes. These algorithms cater for nonlinear systems with both parametric and dynamic uncertainties. This innovative strategy is illustrated with several examples and case studies from real applications. Power converters, electrical machines, mechanical systems, autonomous aircraft and computer vision are among the practical systems dealt with.

Researchers working on adaptive and nonlinear control theory or on control applications will find this monograph of conspicuous interest while graduate students in control systems and control engineers working with electrical, mechanical or electromechanical systems can also gain much insight and assistance from the methods and algorithms detailed.

Professor Astolfi obtained his Doktor in Technischen Wissenschaften (PhD) with medal of honour from the ETH-Zurich in 1995 and a further Dottorato di Ricerca (PhD) from the University of Rome "La Sapienza" in 1996. He was Lecturer in Nonlinear Control Theory at the Automatic Control Laboratory, ETH Zurich (1995-1996) and moved to be Lecturer in Control Engineering at the Dept. of Electrical and Electronic Engineering, Imperial College, London ( between 1996 and 2000. He was a Senior Lecturer and subsequently Reader at the same institution until 2005 when he was appointed Professor in Nonlinear Control Theory. Professor Astolfi has held various visiting lectureships and professorships including at the Terza University of Rome (1996), Rice University, Houston (1999), Kepler University, Linz (2000), Supélec, Paris (2001), the Mittag-Leffler Institute and The Royal Swedish Academy of Sciences, (May-June 2003).

Alessandro Astolfi has been a senior member of the IEEE since 2000 and a fellow of the IEE since 2005. He is a member of the EPSRC Engineering Panel and in 2003 won the Philip Leverhulme Prize "to recognise the outstanding research achievements of young scholars of distinction and promise based in UK institutions" He has been an Associate Professor at the Departmentt. of Electronics and Information, Politecnico di Milano since 1998

Professor Astolfi serves regularly on the program committees of control-related conferences and is an Associate Editor of the following journals: IEEE Trans. Automatic Control, Automatica, International Journal of Control, European Journal of Control and Systems and Control Letters. He examines for Ph.D. at several institutions and he has published many archival journal papers and book chapters. He also holds (together with the other authors a patent for a power factor precompensator. Since 2000 he has supervised 6 Ph.D. candidates.

Romeo Ortega obtained the Docteur D`Etat from the Polytechnical Institute of Grenoble, France in 1984 . He then joined the National University of Mexico, where he worked until 1989. He was a Visiting Professor at the University of Illinois, USA, in 1987-88 and at McGill University, Canada, in 1991-1992, and a Fellow of the Japan Society for Promotion of Science in 1990-1991. Currently he is in the Laboratoire des Signaux et Systèmes of Supélec in Gif-sur-Yvette, France, where he holds a position of Directeur de Recherche from the CNRS. His research interests are in the fields of nonlinear and adaptive control with special emphasis on applications. He is a co-author of the Springer-Verlag book Passivity-based control of Euler–Lagrange Systems, and has published more than 100 scientific papers in international journals. Dr Ortega has been the chairman of the IEEE Working Group on Adaptive Control and Systems Identification, of the IFAC Technical Committee on Adaptive Control and Tuning and of the Automatica Paper Prize Award Committee. He has served as Associate Editor for various scientific journals. Dr Ortega is a member of the IFAC Technical Board and a Fellow of the IEEE.

“The authors present a comprehensive description of a new nonlinear and adaptive control synthesis approach … . It was a pleasure to read the book. … The main idea of each proposed solution is first clearly described, illustrated by a motivating example and then put into rigorous mathematical theorems and derivations. … The book is well written. … I’m sure that this book would be a welcome addition to the library of any researcher and practitioner working on nonlinear control.” (Jacek Kabziński, Mathematical Reviews, Issue 2011 j)

“The book Nonlinear and Adaptive Control with Applications … guides the reader through the development of a collection of tools based on an immersion and invariance (I&I) methodology. … this book provides a highly readable exposition of the main I&I design concepts. … This book is a joy to read and is accessible to graduate-level researchers in nonlinear control as well as practitioners with graduate degrees. The tools developed in this book using the I&I methodology are a welcome addition to any nonlinear control toolbox.” (Randy Freeman, IEEE Control Systems Magazine, Vol. 31, April, 2011)