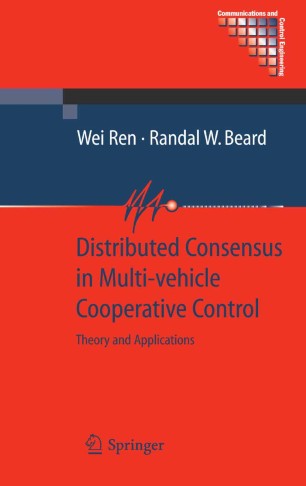 The coordinated use of autonomous vehicles has an abundance of potential applications from the domestic to the hazardously toxic. Frequently the communications necessary for the productive interplay of such vehicles may be subject to limitations in range, bandwidth, noise and other causes of unreliability.

Information consensus guarantees that vehicles sharing information over a network topology have a consistent view of information critical to the coordination task. Assuming only neighbor-neighbor interaction between vehicles, Distributed Consensus in Multi-vehicle Cooperative Control develops distributed consensus strategies designed to ensure that the information states of all vehicles in a network converge to a common value. This approach strengthens the team, minimizing power consumption and the deleterious effects of range and other restrictions.

The monograph is divided into six parts covering introductory, theoretical and experimental material and featuring:

• an overview of the use of consensus algorithms in cooperative control;

Notation drawn from graph and matrix theory and background material on linear and nonlinear system theory are enumerated in six appendices. The authors maintain a website at which can be found a sample simulation and experimental video material associated with experiments in several chapters of this book.

Academic control systems researchers and their counterparts in government laboratories and robotics- and aerospace-related industries will find the ideas presented in Distributed Consensus in Multi-vehicle Cooperative Control of great interest. This text will also serve as a valuable support and reference for graduate courses in robotics, and linear and nonlinear control systems.

Wei Ren is an assistant professor in the Department of Electrical and Computer Engineering at Utah State University. He received his Ph.D. degree in electrical engineering from Brigham Young University, Provo, UT, in 2004. From October 2004 to July 2005, he was a research associate in the Department of Aerospace Engineering at the University of Maryland, College Park, MD. His research has been focusing on cooperative control for multiple autonmous vehicles and autonomous control of robotic vehicles. He is a member of the IEEE Control Systems Society and AIAA.

Randal W. Beard received the B.S. degree in electrical engineering from the University of Utah, Salt Lake City in 1991, the M.S. degree in electrical engineering in 1993, the M.S. degree in mathematics in 1994, and the Ph.D. degree in electrical engineering in 1995, all from Rensselaer Polytechnic Institute, Troy, NY. Since 1996, he has been with the Electrical and Computer Engineering Department at Brigham Young University, Provo, UT, where he is currently an associate professor. In 1997 and 1998, he was a Summer Faculty Fellow at the Jet Propulsion Laboratory, California Institute of Technology, Pasadena, CA. In 2006 and 2007 he was a visiting research fellow at the Air Force Research Laboratory, Munitions Directorate, Eglin AFB, FL. His primary research focus is autonomous control of miniature air vehicles and multivehicle coordination and control. He is currently an associate editor for the IEEE Control Systems Magazine and the Journal of Intelligent and Robotic Systems.

“This book gives a systematic analysis of distributed consensus problems of multivehicle cooperative control and summarizes the main recent work of the authors. The book is well written, and all of the main theoretical results are given together with rigorous mathematical proofs. This book can be a very useful reference for Ph.D. students and researchers in automatic control.” (Jinhuan Wang and Xiaoming Hu, IEEE Control Systems Magazine, Vol. 30, June, 2010)