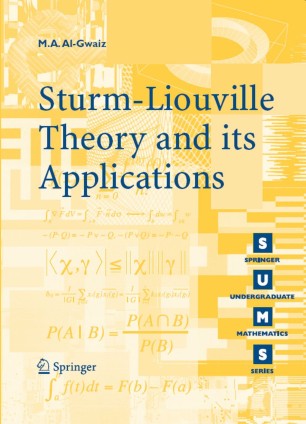 Sturm-Liouville Theory and its Applications

Undergraduate textbooks on Fourier series which follow a pointwise approach to convergence miss the rich geometric content which comes with treating the subject within the inner product space L2. This book, developed from a course taught to senior undergraduates, provides a unified introduction to Fourier analysis and special functions based on the Sturm-Liouville theory in L2. The basic results of this theory, namely the orthogonality and completeness of its eigenfunctions, are established in Chapter 2; the remaining chapters present examples and applications. The last two chapters, on Fourier and Laplace transformations, while not part of the Sturm-Liouville theory, extend the Fourier series method for representing functions to integral representations.

The treatment relies heavily on the convergence properties of sequences and series of numbers as well as functions, and assumes a solid background in advanced calculus and an acquaintance with ordinary differential equations and linear algebra. Familiarity with the relevant theorems of real analysis, such as the Ascoli–Arzelà theorem, is also useful for following the proofs.

The presentation follows a clear and rigorous mathematical style that is both readable and well motivated, with many examples and applications used to illustrate the theory. Although addressed primarily to undergraduate students of mathematics, the book will also be of interest to students in related disciplines, such as physics and engineering, where Fourier analysis and special functions are used extensively for solving linear differential equations.