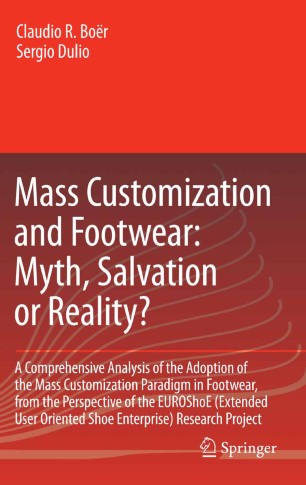 A Comprehensive Analysis of the Adoption of the Mass Customization Paradigm in Footwear, from the Perspective of the EUROShoE (Extended User Oriented Shoe Enterprise) Research Project

Mass customization is an emerging paradigm that is gathering a growing interest in many different industrial fields. The EUROShoE project, financed by the European Commission, explored the applicability of and developed technologies for the adoption of such a paradigm in the footwear business. The three-year research made evident the benefits that shoe companies can obtain by switching to the new business models and contributed to the development of many of the enabling technologies involved in adopting the new paradigm.

Mass Customization and Footwear: Myth, Salvation or Reality? is the only monograph dedicated to the application of mass customization in a particular industry. Based on the outcomes of the EUROShoE project, the book is a detailed analysis of the most relevant case studies of early mass customizers in the footwear sector, highlighting reasons for their failure or success. Both the technological aspects and the business aspects of mass customization, together with some relevant economic indicators are covered in the book.

By showing examples of how a "mature" manufacturing sector like shoe making can be thoroughly renovated in business and mentality by applying this paradigm; Mass Customization and Footwear: Myth, Salvation or Reality? will interest both practitioners in the footwear sector and postgraduates, researchers and lecturers in the area of mass customization.

Professor Claudio Boer has 16 years experience in industry, mainly in the area of computer integrated design and manufacturing, and another 16 years experience as a researcher and professor of industrial technology and innovation. He also has experience as the leader of large research projects at national, European and international levels, particularly in the area of manufacturing innovation and management. He was Project Leader of the EUROShoE project managing 34 international partners. He is currently Director of the Institute for Computer Integrated Manufacturing for Sustainable Innovation (ICIMSI) in Lugano, Switzerland.

Sergio Dulio has almost twenty years of experience in the footwear sector, including 10 years involvement in research projects. His main focus of research is mass customization and footwear. He graduated, magna cum laude, in aerospace engineering at the Polytechnic of Milan in 1981 and went on to specialize in fluid dynamics attending a master course at an important NATO funded research institute in Belgium. In 2003 he was appointed by CNR – ITIA to organize, install and activate a Design and Mass Customization Laboratory in Vigevano, Italy, where a pilot plant for the production of customized shoes was put into operation. The pilot plant was managed as a real shoe factory, using the technologies developed in the EUROShoE project and manufacturing a few hundreds pairs of personalized shoes. This task was completed at the end of 2004. He was also the Technical Project Manager of an even larger footwear research project funded by the EU (the CECmadeShoe project, involving 54 partners and a budget of 21 million Euros) aimed at the development of new materials, processes and product concepts for footwear in the new century. Sergio Dulio, works as a high-level technical consultant, both for ANCI (the Italian Association of Footwear Manufacturers) and ASSOMAC (the Italian Association of shoe machinery producers) with the task of supporting these two organizations in the formulation and activation of their strategic plans in the areas of technological research and innovation. He is also an independent consultant in the field of mass customization in footwear, supporting shoe manufacturers and retailers in their strategies for the introduction of MC in their business.