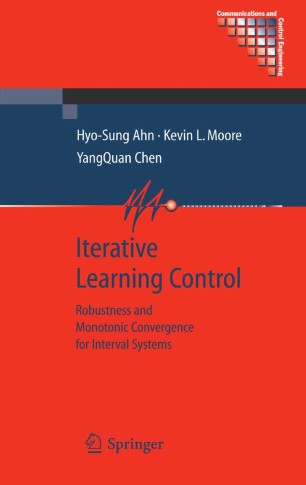 This monograph studies the design of robust, monotonically-convergent iterative learning controllers for discrete-time systems. Two key problems with the fundamentals of iterative learning control (ILC) design as treated by existing work are: first, many ILC design strategies assume nominal knowledge of the system to be controlled and; second, it is well-known that many ILC algorithms do not produce monotonic convergence, though in applications monotonic convergence is often essential.

Iterative Learning Control takes account of the recently-developed comprehensive approach to robust ILC analysis and design established to handle the situation where the plant model is uncertain. Considering ILC in the iteration domain, it presents a unified analysis and design framework that enables designers to consider both robustness and monotonic convergence for typical uncertainty models, including parametric interval uncertainties, iteration-domain frequency uncertainty, and iteration-domain stochastic uncertainty. Topics include:

• Development of iteration-domain uncertainty models in the supervector framework.

• ILC design for monotonic convergence when the plant is subject to parametric interval uncertainty in its Markov matrix.

• An algebraic H-infinity design methodology for ILC design when the plant is subject to iteration-domain frequency uncertainty.

• Development of Kalman-filter-based ILC algorithms when the plant is subject to iteration-domain stochastic uncertainties.

• Analytical determination of the base-line error of ILC algorithms.

Iterative Learning Control will be of great interest to academic researchers in control theory and to industrial control engineers working in robotics-oriented manufacturing and batch-processing-based industries. Graduate students of intelligent control will also find this volume instructive.

Hyo-Sung Ahn has research interests in the areas of robust iterative learning control, periodic adaptive learning control, networked control systems, neural networks, mobile robotics, navigation, biomechatronics, and aerospace engineering. He was research engineer in Space Development and Research Center, Korea Aerospace Indusstries LTD, Korea, and Upper Midwest Aerospace Consortium, USA. He received the M.S. degree from the University of North Dakota in Aerospace Engineering and the Ph.D. in Electrical Engineering from Utah State University. Dr. Ahn, with his co-authors, has been the primary developer of the ideas in the monograph and has a deep understanding of the design of iterative learning control systems, especially as regards robustness.

Professor Moore is the G.A. Dobelman Distinguished Chair and Professor of Engineering in the Division of Engineering at the Colorado School of Mines. He received the B.S. and M.S. degrees in electrical engineering from Louisiana State University and the University of Southern California, respectively. He received the Ph.D. in electrical engineering, with an emphasis in control theory, from Texas A&M University. Most recently he was a senior scientist at Johns Hopkins University's Applied Physics Laboratory, where he worked in the area of unattended air vehicles, cooperative control, and autonomous systems (2004-2005). He was previously an Associate Professor at Idaho State University (1989-1998) and a Professor of Electrical and Computer Engineering at Utah State University, where he was the Director of the Center for Self-Organizing and Intelligent Systems, directing multi-disciplinary research teams of students and professionals developing a variety of autonomous robots for government and commercial applications (1998 -2004). He also worked in industry for three years pre-Ph.D as a member of the technical staff at Hughes Aircraft Company. His general research interests include iterative learning control theory, autonomous systems and robotics, and applications of control to industrial and mechatronic systems. He is the author of the research monograph Iterative Learning Control for Deterministic Systems, published by Springer-Verlag in 1993, and co-author of the book Sensing, Modeling, and Control of Gas Metal Arc Welding, published by Elsevier in 2003. He is a professional engineer, involved in several professional societies and editorial activities, and is interested in engineering education pedagogy. Of particular relevance for the proposed monograph, Dr. Moore has been a seminal contributor and leader in the field of ILC. His early work in the field developed the idea of the supervector approach, and he has studied the problem of monotonic convergence, and he initiated the idea of studying robustness in the iteration domain. He has also been active in organizing ILC workshops, invited sessions on ILC at conferences, and editing special issues of journals. His insights on the ILC problem will directly influence the contents of the proposed monograph.

Dr YangQuan Chen is presently an assistant professor of Electrical and Computer Engineering Department and the Acting Director for CSOIS (Center for Self-Organizing and Intelligent Systems, www.csois.usu.edu) at Utah State University. He obtained his Ph.D. from Nanyang Technological University, Singapore in 1998, an MS from Beijing Institute of Technology (BIT) in 1989, and a BS from University of Science and Technology of Beijing (USTB) in 1985. Dr Chen has 12 US patents granted and 2 US patent applications published, most related to the implementation of ILC algorithms, which lends special insight into the ILC application examples found in the mongraph. He has published more than 200 academic papers and (co)authored more than 50 industrial reports. His recent books include Solving Advanced Applied Mathematical Problems Using Matlab (with Dingyu Xue, Tsinghua University Press. August 2004. 419 pages in Chinese. ISBN 7-302-09311-3/O.392), System Simulation Techniques with Matlab/Simulink (with Dingyu Xue, Tsinghua University Press, April 2002, ISBN7-302-05341-3/TP3137, in Chinese) and Iterative Learning Control: Convergence, Robustness and Applications (with Changyun Wen, Lecture Notes Series in Control and Information Science, Springer-Verlag, Nov. 1999, ISBN: 1-85233-190-9). His current research interests include autonomous navigation and intelligent control of a team of unmanned ground vehicles, machine vision for control and automation, distributed control systems (MAS-net: mobile actuator-sensor networks), fractional order control, interval computation, biofilm and chemotaxis modeling, nanomechatronics and biomechatronics, and iterative/repetitive/adaptive learning control. Dr Chen has been an Associate Editor in the Conference Editorial Board of IEEE Control Systems Society since 2002. He is a founding member of the ASME subcommittee of "Fractional Dynamics" in 2003. He is a senior member of IEEE, a member of ASME, and a member of ISIF (International Society for Information Fusion).