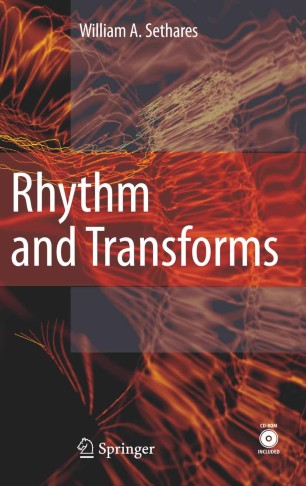 People quite naturally identify the rhythmic structure of music as they tap their feet and sway in time with the beat. Underlying such mundane motions is an act of cognition that is not easily reproduced in a computer program or automated by machine. Rhythm and Transforms asks (and answers) the question: How can we build a device that can "tap its foot" along with the music? The result is a tool for detecting and measuring the temporal aspects of a musical performance: the periodicities, the regularities (and irregularities), the beat, the rhythm. The impact of such a "rhythm meter" on music theory and on the design of sound processing electronics such as musical synthesizers, drum machines, and special effects devices is described. The "rhythm meter" provides a concrete basis for a discussion of the relationship between the cognitive processing of temporal information and the mathematical techniques used to describe and understand regularities in data.
Rhythm and Transforms will be of interest to engineers and others interested in the design of audio devices such as musical synthesizers, special effects devices, drum machines, and electronic keyboards. It will be useful to musicians and composers who exploit computer-based tools in the creation and the recording process. It will be of use to arrangers, musicologists, and others interested in musical analysis. Rhythm and Transforms provides a unique approach to working with environmental sounds, and there are clear applications to the synchronization of audio with video (i.e., film scoring). Finally, the target audience also includes those interested in the way the ear works, and how this influences the types of sound patterns we like to listen to.