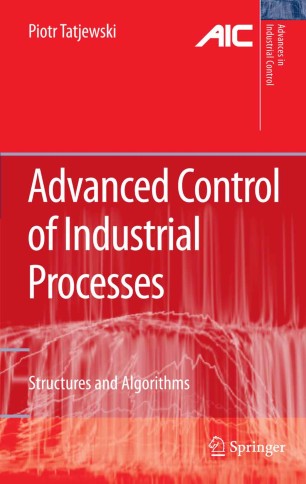 The major topics and key features are:

• Development and discussion of a multilayer control structure with interrelated direct control, set-point control and optimisation layers, as a framework for the subject of the book.

• Systematic presentation and stability analysis of fuzzy feedback control algorithms in Takagi-Sugeno structures for state-space and input-output models, in discrete and continuous time, presented as natural generalisations of well-known practical linear control laws (like the PID law) to the nonlinear case.

• General presentation of the subject of on-line set-point improvement and optimisation, together with iterative algorithms capable of coping with uncertainty in process models and disturbance estimates.

• Thorough illustration of the methodologies and algorithms by worked examples in the text.

• Control and set-point optimisation algorithms together with the results of simulations based on industrial process models, stemming primarily from the petrochemical and chemical industries.

Starting from important and well-known techniques (supplemented with the original work of the author), the book includes recent research results mainly concerned with nonlinear advanced feedback control and set-point optimisation. It is addressed to readers interested in the important basic mechanisms of advanced control, including engineers and practitioners, as well as to research staff and postgraduate students.

Professor Piotr Tatjewski graduated in control engineering from Warsaw University of Technology, Poland in 1972. He obtained his Ph.D. in 1976, and his D.Sc. in 1988, both in control engineering. The first period of his academic career was spent in the group of professor Wladyslaw Findeisen, working on control and optimisation of complex processes, on projects for process industry and concerning water distribution networks. In 1986 he was given a SERC fellowship for research on on-line set-point optimisation and spent 6 months as a research fellow of the Control Engineering Center of The City University London. Since 1990 he has been head of the Process Control Group at the Institute of Control and Computation Engineering, Warsaw University of Technology, leading many research and application projects (including that on advanced control for the Polish Petroleum Company). Professor Tatjewski spent the academic year 1992/1993 at the University of Birmingham in a project supported by the EU TEMPUS program. In 1993 he took up a professorship at Warsaw University of Technology and in 1996 the directorship of the Institute of Control and Computation Engineering there. In 2004 he was elected a member of the Committee of Automation and Robotics of the Polish Academy of Sciences. He works for the Ministry of Education and Science as an expert on standards in university education.

An experienced researcher and teacher, Professor Tatjewski has published 4 books (two in English) and over 20 journal papers as author or co-author and participated in numerous international conferences. He has taught many courses, including Feedback Control, Digital Feedback Control, Hierarchical Control and Optimisation, and Advanced Control. Between 1994 and 1997 he was the coordinator and contractor of the large EU project Information Technology for Control and Decision Support – Curriculum Development within the TEMPUS program, co-ordinating work in 4 major Polish technical universities and 11 universities from EU countries (Germany, France, UK, Italy, Spain and Denmark). His main research interests are multilayer-multilevel process control and optimisation, fuzzy modelling and control, model predictive control of linear and nonlinear processes, soft computing methods, control and optimisation of large-scale processes.

"As the title suggests, the book is aimed both to structures and algorithms of advanced control of industrial processes … . a useful monograph by a careful topic selection and by the significance of applications and worked examples, as well as by results of many simulations based on industrial process models, stemming primarily from petrochemical and chemical industries. The book is highly recommended both to researchers and postgraduate students as well as to control/electrical/electronics engineers, applied mathematicians and any other professionals or scientists … ." (Mihail Voicu, Zentralblatt MATH, Vol. 1134 (12), 2008)