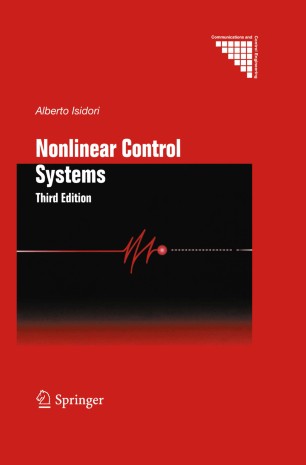 This established and authoritative text focuses on the design and analysis of nonlinear control systems. The author considers the latest research results and techniques in this updated and extended edition.

Examples are given from mechanical, electrical and aerospace engineering. The approach consists of a rigorous mathematical formulation of control problems and respective methods of solution. The two appendices outline the most important concepts of differential geometry and present some specific data not often found in other standard works. This makes Nonlinear Control Systems suitable as a graduate and undergraduate text and as a source of reference.

Since 1975, he has been Professor of Automatic Control at the University of Rome "La Sapienza". Since 1989, he has also held a position of rofessor (on a half-time basis) at the Department of Systems Science and Mathematics, Washington University, St. Louis, Missouri. He has held visiting positions at several academic institutions, including the University of Illinois (Urbana, Il.), the University of California (Berkeley, Ca.) and the ETH (Zurich, Switzerland).

His research interests are primarily focused on mathematical control theory and control engineering.

From 1985 to 1990 Isidori's research concentrated on the development of the "nonlinear analogue" of the notion of the "zero" of a transfer function. Taking as a point of departure the "geometric" interpretation of this notion, the concept of nonlinear zero dynamics was introduced, studied, and applied. As a result, it was shown that most of the features of the notion of zeros of the transfer function of a linear system are actually manifestations of more general principles. Remarkable examples of application of this theory consisted in the study and the solution of the nonlinear equivalent of the so-called "servomechanism problem" of linear system theory and in the characterization of the conditions for feedback equivalence to a nonlinear passive system.

Since the 90s, Isidori has focused his research interests on problems of disturbance attenuation and robust stabilization of nonlinear systems.

-Georgio Quazza Medal of IFAC, for ?pionering and fundamental contributions to the theory of nonlinear control,? 1996.
-Fellow of the Institute of Electrical and Electronic Engineers, for ?fundamental contributions to nonlinear control theory?, 1987.
-Outstanding Paper Award for papers published on IEEE Transactions on Automatic Control, in 1981 and in 1990.
-Outstanding Paper Award a paper published on Automatica in1991.

Isidori's book is essential for anyone preparing for serious reading or basic research in the differential geometric approach to control theory and will not disappoint those mathematically trained. I have observed its use in the hands of two teachers other than the author; the students enjoyed it and made good use of it later. There is no universal solvent for nonlinear control problems, but the methods presented here are powerful.