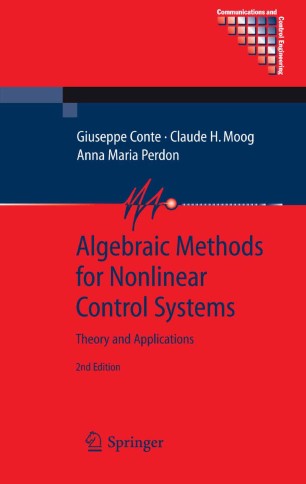 A self-contained introduction to algebraic control for nonlinear systems suitable for researchers and graduate students.

The most popular treatment of control for nonlinear systems is from the viewpoint of differential geometry yet this approach proves not to be the most natural when considering problems like dynamic feedback and realization. Professors Conte, Moog and Perdon develop an alternative linear-algebraic strategy based on the use of vector spaces over suitable fields of nonlinear functions. This algebraic perspective is complementary to, and parallel in concept with, its more celebrated differential-geometric counterpart.

Algebraic Methods for Nonlinear Control Systems describes a wide range of results, some of which can be derived using differential geometry but many of which cannot. They include:

• classical and generalized realization in the nonlinear context;

• accessibility and observability recast within the linear-algebraic setting;

• results for dynamic and static state and output feedback.

Dynamic feedback and realization are shown to be dealt with and solved much more easily within the algebraic framework.

Originally published as Nonlinear Control Systems, 1-85233-151-8, this second edition has been completely revised with new text – chapters on modeling and systems structure are expanded and that on output feedback added de novo – examples and exercises. The book is divided into two parts: the first being devoted to the necessary methodology and the second to an exposition of applications to control problems.

From the reviews of the second edition: “Algebraic Methods for Nonlinear Control Systems is a book published under the Springer Communication and Control Engineering publication program, which presents major technological advances within these fields. The book aims at presenting one of the two approaches to nonlinear control systems, namely the differential algebraic method. … is an excellent textbook for graduate courses on nonlinear control systems. … The differential algebraic method presented in this book appears to be an excellent tool for solving the problems associated with nonlinear systems.” (Dariusz Bismor, International Journal of Acoustics and Vibration, Vol. 14 (4), 2009)
Buy options