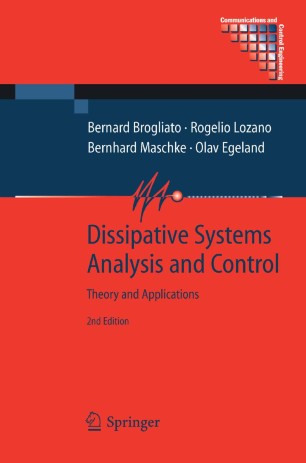 Dissipative Systems Analysis and Control (second edition) presents a fully revised and expanded treatment of dissipative systems theory, constituting a self-contained, advanced introduction for graduate students, researchers and practising engineers. It examines linear and nonlinear systems with examples of both in each chapter; some infinite-dimensional examples are also included. Throughout, emphasis is placed on the use of the dissipative properties of a system for the design of stable feedback control laws. The theory is substantiated by experimental results and by reference to its application in illustrative physical cases (Lagrangian and Hamiltonian systems and passivity-based and adaptive controllers are covered thoroughly).

The second edition is substantially reorganized both to accommodate new material and to enhance its pedagogical properties. Some of the changes introduced are:

• Complete proofs of the main theorems and lemmas.

• An improved appendix with introductions to viscosity solutions, Riccati equations and some useful matrix algebra.

…an extensive exposition of both the mathematics, physics motivation and control applications of passivity and dissipativity… the richness of a very impressive inventory of illustrating examples stands out as a point of excellence…

…an excellent reference for graduate students, engineers and researchers.