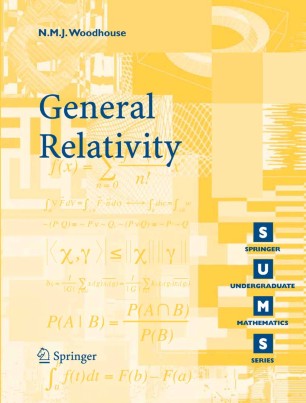 Based on a course given at Oxford over many years, this book is a short and concise exposition of the central ideas of general relativity. Although the original audience was made up of mathematics students, the focus is on the chain of reasoning that leads to the relativistic theory from the analysis of distance and time measurements in the presence of gravity, rather than on the underlying mathematical structure. The geometric ideas - which are central to the understanding of the nature of gravity - are introduced in parallel with the development of the theory, the emphasis being on laying bare how one is led to pseudo-Riemannian geometry through a natural process of reconciliation of special relativity with the equivalence principle. At centre stage are the "local inertial coordinates" set up by an observer in free fall, in which special relativity is valid over short times and distances.

In more practical terms, the book is a sequel to the author's Special Relativity in the same series, with some overlap in the treatment of tensors. The basic theory is presented using techniques, such as phase-plane analysis, that will already be familiar to mathematics undergraduates, and numerous problems, of varying levels of difficulty, are provided to test understanding. The latter chapters include the theoretical background to contemporary observational tests - in particular the detection of gravitational waves and the verification of the Lens-Thirring precession - and some introductory cosmology, to tempt the reader to further study.

While primarily designed as an introduction for final-year undergraduates and first-year postgraduates in mathematics, the book is also accessible to physicists who would like to see a more mathematical approach to the ideas.