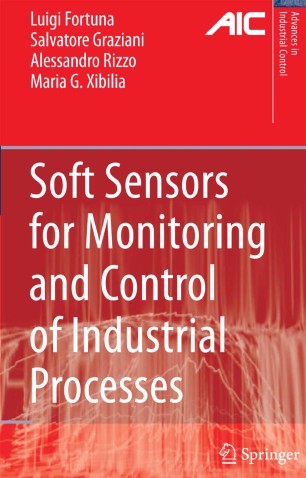 Soft Sensors for Monitoring and Control of Industrial Processes

Soft sensors are inferential estimators, drawing conclusions from process observations when hardware sensors are unavailable or unsuitable; they have an important auxiliary role in sensor validation when performance declines through senescence or fault accumulation.

The non-linear behaviour exhibited by many industrial processes can be usefully modelled with the techniques of computational intelligence: neural networks; fuzzy systems and nonlinear partial least squares.

Soft Sensors for Monitoring and Control of Industrial Processes underlines the real usefulness of each approach and the sensitivity of the individual steps in soft-sensor design to the choice of one or the other. Design paths are suggested and readers shown how to evaluate the effects of their choices. All the case studies reported, resulting from collaborations between the authors and a number of industrial partners, raised challenging soft-sensor-design problems. The applications of soft sensors presented in this volume are designed to cope with the whole range from measuring system backup and what-if analysis through real-time prediction for plant control to sensor diagnosis and validation. Some of the soft sensors developed here are implemented on-line at industrial plants.

• advice on data selection and choice of model structure;

• strategies for the improvement of soft-sensor performance;

• uses of soft sensors in fault detection and sensor validation;

• soft sensors in use in industrial applications such as a debutanizer column and a sulfur recovery unit.

This monograph guides interested readers – researchers, graduate students and industrial process technologists – through the design of their own soft sensors. It is self-contained with full references and appraisal of existing literature and data sets for some of the case studies can be downloaded from springer.com.

Luigi Fortuna has been Professor of System Theory at the University of Catania since 1994. He has published more than 280 technical papers and is co-author of seven books including, for Springer, Soft Computing (1-85233-308-1, 2001, 280 pp, SC) and Microelectronics and Microsystems (1-85233-499-1, 2001, 222 pp, HC). He holds several USA patents. His scientific interests include automatic control, nonlinear science and complexity, chaos, cellular neural networks with applications in bioengineering. He has been an IEEE Fellow since 2000.

Salvatore Graziani received a M.S. degree in electronic engineering and a Ph.D. in electrical engineering, both from the Università degli Studi di Catania, Italy, in 1990 and 1994, respectively. In 1990 he joined the Dipartimento di Ingegneria Elettrica, Elettrica e dei Sistemi, Università di Catania, where he is an Associate Professor of Electric and Electronic Measurement and Instrumentation. His primary research interests lie in the field of sensors and actuators, signal processing, multisensor data fusion, neural networks, and smart sensors. He has co-authored several scientific papers and one book.

Maria Gabriella Xibilia holds an M.S. degree in electronic engineering and a Ph.D. in electrical engineering, both from the Università degli Studi di Catania, Italy, in 1991 and 1995, respectively. In 1998 she joined the Dipartimento di Matematica of the Università degli Studi di Messina, where she is an Assistant Professor of Automatic Control. Her primary research interests lie in the field of process control, system identification, soft computing and fault detection. She has coauthored several scientific papers and three books.

"The monograph is devoted to design procedure of soft sensors and their applications for solving some industrial problems. … The monograph highlights the importance of using knowledge from industrial experts and from the existing industrial process literature. It is full of valuable information about the veracity of different methods. The monograph will be appreciated by the industrial control engineer for its practical insights and by the academic staff for its case-study applications."(Tadeusz Kaczorek, Zentralblatt MATH, Vol. 1136 (14), 2008)