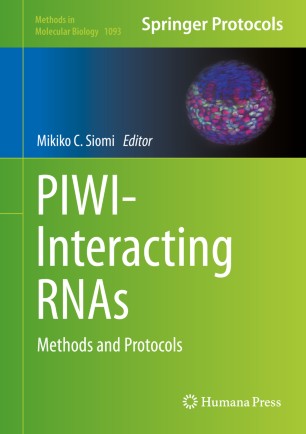 PIWI-interacting RNAs (piRNAs) are the third and most-recently discovered group of silencing-inducible small RNAs in animals. PIWI-Interacting RNAs: Methods and Protocols provides the most recent methods and protocols for studying piRNAs in the gonads of a wide range of species, as well as in any other organs where piRNAs may be detected. Comprehensive high-throughput sequencing analysis of piRNAs in embryos, testes and ovaries of D. melanogaster, as well as in mouse and rat testes, has raised the profile of piRNAs and thus further accelerated piRNA studies. In addition to C. elegans, other model species such as Drosophila melanogaster, Arabidopsis thaliana and mice, along with cultured cell lines such as HeLa and Drosophila Schneider 2 (S2), and other such organisms have been used to address the fundamental questions of the biogenesis and functions of RNAi-triggering small non-coding RNAs. Written in the successful Methods in Molecular Biology series format, chapters include introductions to their respective topics, lists of the necessary materials and reagents, step-by-step, readily reproducible protocols, and notes on troubleshooting and avoiding known pitfalls.

Authoritative and easily accessible, PIWI-Interacting RNAs: Methods and Protocols seeks to serve both established researchers and newcomers to the field to progress towards the ultimate goal of understanding the mechanisms and actions of piRNAs.