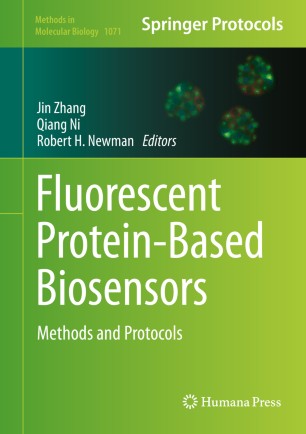 In Fluorescent Protein-Based Biosensors: Methods and Protocols, experts in the field have assembled a series of protocols describing several methods in which fluorescent protein-based reporters can be used to gain unique insights into the regulation of cellular signal transduction.  Genetically encodable fluorescent biosensors have allowed researchers to observe biochemical processes within the endogenous cellular environment with unprecedented spatiotemporal resolution. As the number and diversity of available biosensors grows, it is increasingly important to equip researchers with an understanding of the key concepts underlying the design and application of genetically encodable fluorescent biosensors to live cell imaging. Written in the successful Methods in Molecular Biology series format, chapters include introductions to their respective topics, lists of the necessary materials and reagents, step-by-step, readily reproducible protocols, and notes on troubleshooting and avoiding known pitfalls.

Authoritative and easily accessible, Fluorescent Protein-Based Biosensors: Methods and Protocols promises to be a valuable resource for researchers interested in applying current biosensors to the study of biochemical processes in living cells as well as those interested in developing novel biosensors to visualize other cellular phenomena.