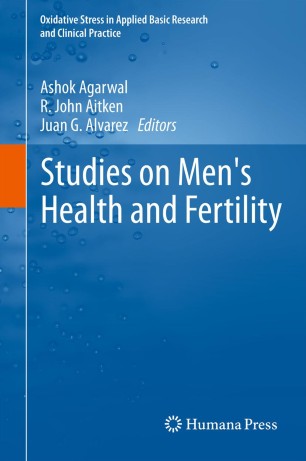 Studies on Men's Health and Fertility

Studies on Men’s Health and Fertility provides a comprehensive series of up-to-the-minute reviews addressing the role of oxidative stress in the aetiology of reproductive pathologies in the male. This volume represents by far the most detailed, authoritative review of the field that has been produced to date.  The text encompasses the basic science of reactive oxygen species (ROS) production by mammalian spermatozoa, the way in which these highly reactive molecules are processed by the germ line and the physiological significance of this redox activity in the generation of a functional gamete. The factors responsible for perturbing the delicate balance between physiological redox signaling on the one hand and oxidative stress on the other are also extensively reviewed and some of the first clues concerning the underlying mechanisms (age, heat, infection, cryostorage, aberrant lipid metabolism), clearly identified.  From a clinical perspective there are chapters setting out the methods we should be using to diagnose oxidative stress in the male germ line, a clinical perspective on the aetiology of this condition and detailed considerations of the most suitable means of ameliorating such stress from a therapeutic point of view.

Studies on Men’s Health and Fertility is intended to provide clinicians and scientists with a snap shot of the current status of this exciting, rapidly moving field. The book will be of value to clinicians interested in strategies for the management of oxidative stress in their infertility patients and scientists wishing to understand the molecular mechanisms underpinning the generation of ROS by these cells and its pathophysiological significance.  It was not so long ago that the ability of spermatozoa to generate ROS was a hotly disputed topic.  With the publication of this book such doubts can finally be laid to rest. There is now no doubt that these cells actively generate ROS, that oxidative stress is a major contributor to defects in male reproductive health and that the successful clinical management of this condition depends on developing a deeper understanding of the underlying molecular mechanisms.  In this quest, Studies on Men’s Health and Fertility will be seen as a clear and important milestone.

Ashok Agarwal is the Director of the Clinical Andrology Laboratory and Reproductive Tissue Bank, and the Director of Research at the Center for Reproductive Medicine since 1993. He holds these positions at The Cleveland Clinic Foundation, where he is a Professor at the Lerner College of Medicine of Case Western Reserve University. Ashok received his Ph.D. in 1983 and did his post-doctoral training in Reproductive Biology under a fellowship from The Rockefeller Foundation at Harvard Medical School, Boston. He was an Instructor in Surgery and then an Assistant Professor of Urology at Harvard Medical School from 1988 to 1993. Ashok has published over 500 scientific papers and reviews in peer reviewed scientific journals. He is currently an editor of 10 medical text books/ manuals related to male infertility, ART, fertility preservation, DNA damage and antioxidants. Ashok is active in basic and clinical research and his laboratory has trained over 150 basic scientists and clinical researchers from the United States and abroad. In addition, more than 150 medical, undergraduate, and high school students have worked in his laboratory. His current research interests include studies on molecular markers of oxidative stress, DNA integrity, and apoptosis in the pathophysiology of male and female reproduction, effect of radio frequency radiation on fertility and fertility preservation in patients with cancer.

Professor Juan G. Alvarez received his Medical Doctor degree at the University of Santiago of Compostela in Spain, has a Ph.D in Physical-Chemistry by the University of Villanova, Pennsylvania, and was Associate Professor of Obstetrics and Gynecology and Reproductive Biology at Harvard Medical School. During over three decades he has developed his scientific career in world leading research centers such as the Reproductive Biology Unit at the University of Pennsylvania and Harvard Medical School, where he was Director of Research at the Department of Obstetrics and Gynecology and Co-Director of the Women’s Health Research Institut at Beth Israel Deaconess Medical Center in Boston. He was also Scientific Director of Institut Marques in Barcelona, one of the leading IVF centres in Spain. He carried out basic and clinical research in the field of infertility with particular emphasis in oxygen radical chemistry and biochemistry in mammalian spermatozoa and free radical-induced sperm DNA damage in human spermatozoa. Currently, he is Director of Centro ANDROGEN, one of the leading male infertility clinics in Spain. He combines his clinical activities with research in the area of male infertility. He collaborates with the Cleveland Clinic Glickman Urological Institute, Harvard Medical School, Yale University and the Massachusetts Institute of Technology (MIT).

“The authors achieve their stated goal of exploring the basic science, physiology, and pathophysiology behind reactive oxygen and nitrogen species in male reproductive health. … The book does an excellent job of highlighting the seminal work that has defined how oxidative stress contributes to men’s overall genitourinary health. … This is an excellent resource for basic science researchers or clinicians looking to examine the role of oxidative stress in men’s genitourinary health.” (James M. Hotaling, Doody’s Book Reviews, June, 2012)
Buy options